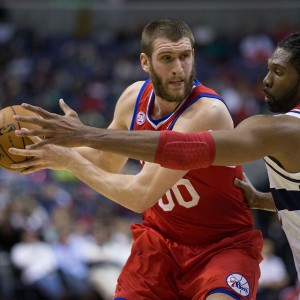 Aided by six straight wins, the Cleveland Cavaliers continued their push towards the playoffs this NBA trade deadline afternoon by acquiring Philadelphia 76ers center, Spencer Hawes. The 7-foot Hawes was having a career year with the Sixers, averaging 13 points and 8.5 rebounds per game. Hawes is in the final year of his contract, which pays him $6.5 million.

Now just three games out of the Eastern Conference’s 8th seed, the Cavs add an athletic big man who can stretch the floor and open up the lane. The move can also be viewed as an insurance policy for center/forward Anderson Varejao who has missed the last four games because of injury.

In exchange for Hawes, Philadelphia received Earl Clark, Henry Sims and two second round draft choices. Neither Clark nor Sims were regulars in the Cleveland rotation and will be seen as nothing more than expiring contracts to the rebuilding 76ers.

Despite plenty of rumors, Jarrett Jack, Luol Deng and Tyler Zeller were all still members of the Cavaliers as the NBA’s trade deadline passed at 3 pm ET.

The re-tooled and red hot Cavaliers will continue their playoff push Friday night against the Atlantic Division-leading Toronto Raptors in the T-Dot. It is not yet known if Hawes will make the trip across the border.