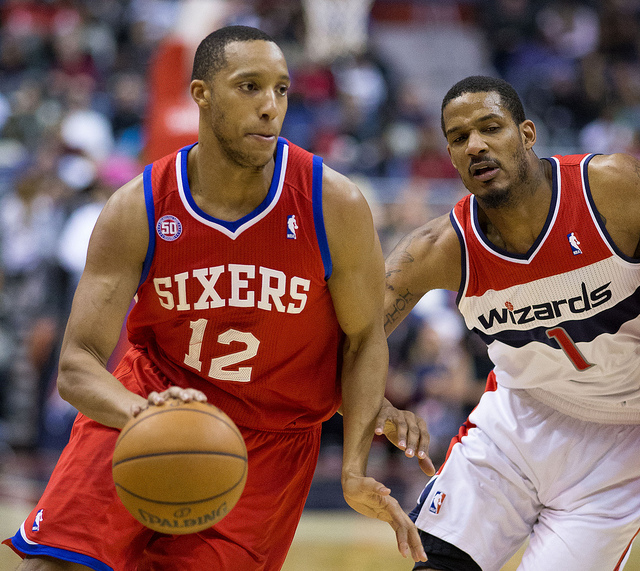 Thanks to a conspiracy to make sure I don’t have time to eat breakfast this morning, NBA general managers managed to squeeze in 11 trades in the 48 hours before the trade deadline. Here’s a list of each acquisition along with reactions from around the league.

Granger, 30, has been a mere accessory for the Pacers since returning from lingering knee injuries. In limited minutes over the past two seasons, he’s averaged 7.9 points while shooting 35 percent — a far cry from his once-lofty numbers as Indiana’s first-option scorer. (He’s averaging 8.3 points on 35.9 percent shooting in 29 games this season.) The team’s natural evolution and Granger’s $14 million expiring contract presented an opportunity to move him, and the Pacers found a suitable trade partner in the ever-active Sixers.

Turner, 25, has taken full advantage of Philadelphia’s never-ending fast break by averaging a career-high 17.4 points, six rebounds and 3.7 assists. That’s an impressive and unique stat line — one shared (or bested) by just four other players in the league. Sports Illustrated

hat may seem like a lot of trouble to go to for a 37-year-old averaging just 19 minutes per contest, but this deal was less about Miller’s production on the court than what he’ll bring to Washington’s young locker room.

And to John Wall in particular.

Miller’s departure from Denver has been all but assured for weeks. He’d been exiled from playing after openly confronting head coach Brian Shaw on Dec. 30. The uncharacteristic display of hostility perhaps said more about how things are going in Denver than it did about the usually professional Miller. Bleacher Report

In his first season with the Nets since coming over in the Paul Pierce and Kevin Garnett trade during the summer, Terry has averaged 4.5 points in 35 games. The 6-foot-8 Evans, known for his rebounding, has appeared in 30 games and is averaging 2.7 points and 5.0 rebounds. He averaged 11.1 rebounds in 80 games last season. ESPN

In continuing their season-long search for a backup point guard, the Warriors acquired Steve Blake from the Lakers for reserve guards Kent Bazemore and MarShon Brooks on Wednesday — a day ahead of the league’s noon trade deadline.

Bazemore and Brooks were seldom-used pieces of the Warriors’ bench, which has been a sore spot all season. The Warriors’ reserves are last in the league in assists and 29th out of the NBA’s 30 teams in scoring and minutes played.  San Francisco Gate

Breaking: Daryl Morey somehow just got Jordan Hamilton for Aaron Brooks. Morey loves to take shots on failed projects who once had first-round talent, and Hamilton fits the bill. He looks like he could be a silky scorer, only he never really scores efficiently and plays zippo defense. He dominates summer league with herky-jerky off-the-bounce stuff and midpost scoring that doesn’t translate to the NBA. But he’s got good size, he’s a league-average 3-point shooter, and he’s on a cheapo expiring deal. I could see Houston giving him a small shot if they try to revive the small-ball lineups they’ve ditched of late. It’s not like Francisco Garcia is lighting the world on fire.

The Rox have no space for Brooks, barring a Jeremy Lin deal, which they’ve tried like heck to execute all day. Denver needs a point guard, since they have zero healthy ones. But they’re toast this season anyway, as far as the playoffs go. Grantland

The Clippers (37-19) made two minor moves in the waning minutes of Thursday’s noon Pacific Time deadline, sending reserve forward Antawn Jamison to Atlanta in exchange for the draft rights to 2005 second rounder Cenk Akyol and dealing center Byron Mullens to Philadelphia along with a conditional second round Draft pick for a future second rounder.

“That was more for flexibility for the summer,” Rivers said. “Those are tough ones for me. From a coaching standpoint, to do a move that is not necessarily making the team better is very difficult. But from a team standpoint it was the right thing to do.”

The 37-year-old Jamison, who was signed this summer, appeared in 22 games after waiting nearly a month before making his debut. Rivers said the decision to move Jamison was in part because of the Jan. 16 signing of Hedo Turkoglu as well as the prospects of playing forward Jared Dudley at the 4-spot in small-ball lineups. NBA

The Cavs were seen to be potential sellers a couple weeks ago, but have quickly become buyers at the deadline because of an unexpected six-game winning streak that has put them back in the thick of the Eastern playoff race. At 22-32, they’re just 3.5 games out of eighth.

Hawes will certainly help as he’s been one of the few bright spots in Philly this season, averaging 13.0 points and 8.5 rebounds.

Hawes is on an expiring deal that pays him $6.6 million this season and by adding him, the Cavs have inched closer to breaking over the luxury tax line. But the trade also sends a bigger message: The Cavs had been said to possibly be shopping Luol Deng as well at the deadline, but with bringing in help, it seems like they just want to make a push. CBS Sports

“We are excited to add a pair of quality players to our backcourt,” Bobcats president Rod Higgins said in a statement. “Gary is an exceptional shooter and Luke is a veteran point guard who can help us off the bench.”

The Bobcats (who at 25-30 are in eighth place in the Eastern Conference) have been chasing the disgruntled Neal for some time, but Milwaukee balked at a pure Neal-for-Sessions swap because Sessions is making $5 million this season, compared to Neal’s $3.25 million. Adding Ridnour to the trade puts the financial onus back on Charlotte. ESPN

Mullens, a fourth-year center out of Ohio State, is averaging just 2.5 points and 1.2 rebounds this season in a little over six minutes per game. He has a player option for $1.2 million next season, which means the Sixers could view him as a potential backup to Nerlens Noel. New Jersey Online

Mason will be waived by the Kings and become a free agent, and the pick the Kings are trading to the Heat likely will never convey.

The Heat were interested in having a roster spot open so they can add a free agent that may become available in the next week. They are looking for a veteran wing player.

Mason averaged 3.0 points in 25 games for the Heat this season. ESPN

At first glance the Austin Daye for Nando De Colo trade that’s reportedly just gone down reeks of a Colangelo move, trading just for the sake of looking busy. That’s what happened last year when BC ridiculously decided to trade a second-round pick to the Phoenix Suns for Sebastian Telfair. (I’m still mad about this one.)

But based on salary reports, the move could actually have some off-the-court benefit before even getting to the on-the-court part, saving Toronto a few hundred thousand dollars next season. Daye wasn’t going to play unless 80 per cent of the team was suddenly vaporized by aliens so if you can move a piece like that for at least a bit of cap space, all good.

And wait, there’s more! De Colo might actually play for Toronto this year. He’s averaged only 4.3 points and 1.2 assists in 26 games for the Spurs this season, but he’s only in his sophomore campaign and as a 6-5 point guard, might represent an upgrade behind Greivis Vasquez for the Raptors’ third-string PG role. Raptors HQ