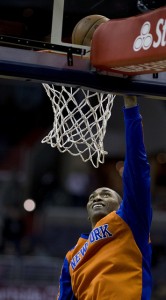 As word spread Saturday that the New York Knicks had been in discussion to negotiate buyouts with Metta World Peace and Beno Udrih, some of their soon-to-be former teammates were a mixture of surprised and resigned to the business side of life in the NBA.

Before the Knicks lost 107-98 in Atlanta, New York head coach Mike Woodson confirmed what several NBA sources suggested: that the team seeks to part ways with the rarely-used veterans. They were not with the team in Atlanta.

“They weren’t in the rotation, and I’m not going to linger on it,” the coach said. “We’re buying them out and as a coach when guys work for me I wish them nothing but the best when they move on. And we’re going to move on.

“We’re going a different direction, and we’ve got to figure out another spot or two for our ball club.”  ESPN

The Knicks have more talent this season, but are playing much worse than last year’s 54-win campaign. That has to fall on Woodson who has mismanaged minutes and egos all season long.

I’m really tired of piling onto New York teams for silliness. Just be ready for Carmelo Anthony to leave in free agency. He could stay for the money but everyone has their limits. – AL