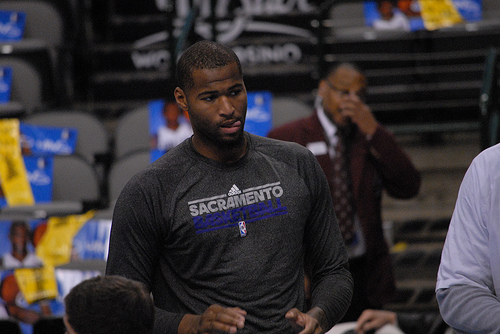 Some nights it can be detrimental to both himself and his teammates, cutting down all in a blind rage; others, it can act as a motivator, drawing out of him a defiance that seemingly fuels his performance.

Saturday night, the blade drew blood from both sides. For three quarters or so, Cousins victimized himself, sabotaging his game by focusing on an ongoing scuffle with Kris Humphries, who outplayed Cousins throughout the the night. Humphries wasn’t even supposed to start. If it wasn’t for a mild concussion Jared Sullinger sustained, his minutes would’ve been drastically lessened. Yet there he was, outdueling Cousins and taking him out of the game psychologically.

Near the end of the contest, though, Cousins harnessed his temper, grabbing a few crucial rebounds and drawing fouls to secure the Sacramento Kings a 105-98 win over the Boston Celtics.

“We were poised down the stretch and that’s really what sealed the game,” Cousins said. “We got the win, so that’s all that really matters.”

From the second quarter on, Humphries seemed to make an effort to get under Cousins’ skin and the game’s physicality gradually increased as tempers on both sides flared. Once the contest became chippy, with either team trying to get in the next shot at the other, both squads voiced complaints with the officials, who responded by imposing their presence upon the game.

The officiating crew, led by Marc Davis, whistled 46 combined fouls, including a flagrant-1 on Carl Landry in the fourth quarter, and handed out four technical fouls. The contentious night culminated with 35.7 seconds left in regulation, the game securely in hand for Sacramento, when Davis ejected both Gerald Wallace and Celtics head coach Brad Stevens.

The Kings—particularly Cousins, who could have rightfully received a second technical foul on a number of occasions—flirted with a similar outcome, narrowly avoiding a mental and competitive collapse.

“It’s a physical game and we can’t let people get under our skin and take us out of what we’re trying to do,” Malone said. “It’s an emotional game, guys get frustrated and when they’re out there playing hard and don’t feel they’re getting the calls that they deserve, that leads to frustration. How we handle our frustration, I think, is the most important game. If we allow that frustration to take us out of our game or not allow us to get back in transition, then it becomes a huge (negative) impact on the game.”

Although they seemed preoccupied by perceived injustices, the Kings put together a strong shooting performance, while limiting the Celtics’. Despite shooting 52.1 percent and holding Boston to 39.1 percent, the contest was close throughout. Turnovers on offense and fouls on defense held the Kings back from permanently extending their lead.

Sacramento never trailed, and built a lead as large as 16 points, but continually helped Boston get back into the game. Jeff Green shot a nightmarish 7-of-25 from the field, but got to the free-throw line 18 times. Green’s misses were more a product of poor shooting than good defense, and Ben McLemore’s inability to guard Green forced Malone to take him out of the game in favor of Travis Outlaw.

The Kings were also charitable enough to surrender the Celtics the ball 18 times, which led to 19 points.

Isaiah Thomas, though, was able to provide enough stability on offense to lead Sacramento to the victory. He finished with 21 points and a career-high 12 assists.

In addition to keeping the offense flowing, Thomas has recently been tasked with getting McLemore involved. The quiet—on and off of the court—rookie has taken over as the starting shooting guard. Before the game Malone said the Kansas product’s limited aggressiveness was partly on McLemore, but also on his teammates.

“A lot of it is on me,” Thomas said. “Because he doesn’t get the ball that much and when he does, he should be in a scoring position. Tonight he got a few threes in transition, where right when I pass it, I’m yelling at him ‘shoot it’ because he’s so wide open. He just has to be aggressive and pick and choose his spots.”

The Kings picked and chose their spots Saturday, just avoiding a loss of composure. They won’t have much time to cool down and regather themselves, as they take on the Denver Nuggets tonight.