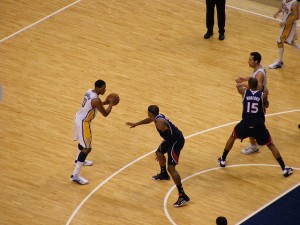 Thursday’s trade deadline was mostly yawn-worthy. As the deadline neared, it looked as if the most significant trade was one highlighted by Steve Blake. Then, shortly after the deadline had passed, reports started trickling out that one more trade that had been completed. Soon enough it was confirmed: Danny Granger had been shipped to the Philadelphia 76ers along with a 2015 second-round pick in exchange for Evan Turner and Lavoy Allen.

From the Indiana Pacers’ perspective the trade is advantageous. While Evan Turner isn’t quite the player his numbers may suggest (he’s a classic case of good numbers on a bad team), he does provide better depth at the wing. Also, Lavoy Allen, while by no means a world-beater, can provide decent play in small doses.

The outlook is not so bright when looking at it from Granger’s perspective. He has been exiled from a team with real championship aspirations to one of the NBA’s worst teams in the midst of tremendous tankitude.

There is light at the end of the tunnel for Granger, however. It seems a foregone conclusion that the 76ers will buy him out of his contract, making him a free agent and allowing him to go wherever he pleases, more or less. As I see it, there are four likely landing spots for Granger, assuming he is bought out.

But first, a little bit about what to expect from Granger on the court: He won’t be able to notch the 20 PPG mark like he did a few years ago, but he still will be useful. His shooting numbers have been subpar so far this year, but February has been his best shooting month, and that part of his game will likely continue to improve. Still, his rebounding and defense is pedestrian. Ultimately he will be a big body who can space the floor for 15 to 20 minutes per game and hit the occasional big shot. Again, he’s not the face of a franchise any more, but he can be a key cog in a championship-level team.

Here are four teams likely to make a run at him:

This move would be about gamesmanship as much as it would be about actually need. The Heat’s success is really predicated on Dwyane Wade’s health, and they already have two great floor spacers in Shane Battier and Ray Allen. Having said that, there’s always room for another veteran sharpshooter. Also, should Michael Beasley implode, which is not so unlikely, Granger could be an important extra body.

The Wizards still can’t quite get over the .500 threshold. They’ve looked really good at times, but haven’t been able to do so consistently. They’re also relatively thin on the wing. After Bradley Beal, Trevor Ariza and Martell Webster, they don’t have much help. Granger could be a huge boost for them, not only as a spot-up shooter, but also as a veteran presence in the locker room.

The Warriors are a rare case of a “good shooting team” without many good shooters. The Warriors take the seventh most three-pointers per game, but only have three guys that can shoot threes effectively. Sure, one of those guys is the best shooter in the world in Stephen Curry, but that doesn’t change the fact that they lack shooters. Granger would give this team more lineup flexibility and a fourth competent three-point shooter, which could be immensely important given how this team has struggled offensively this year.

This is a strange situation simply because the team wasn’t built to be good this year. They have defied all expectations and are a likely playoff team. Still, they have some holes in their lineup. They have gotten unexpectedly great play out of Miles Plumlee and Gerald Green, but could use one more piece. Danny Granger just might be that guy considering their small forward rotation consists of P.J. Tucker and the Morris twins. This threesome has actually been solid for the Suns this year, but that doesn’t mean the front office shouldn’t jump at the opportunity to fortify it with a shooter like Granger.

When it comes time for Granger to make a decision, I suspect the Heat will be at the top of his list. Ultimately, they give him the best chance to get a ring. Also, after being unceremoniously shipped out of Indiana, it wouldn’t surprise me if he jumped at the chance to seek a little retribution.