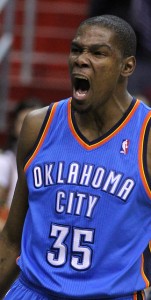 For a guy who is known for hugging his mom after games, inviting strangers to play flag football with him on random occasions, and saving puppies from burning buildings (okay I made one of those up), Kevin Durant sure does find himself at the center of a few fair debates.

Is he the best pure scorer in the NBA? Is he a great two-way player now? Is he as good as LeBron James? Does he need Russell Westbrook? What will his legacy in the NBA be?

He is already a four-time All Star, a three-time NBA scoring champion (going on four), has played in the NBA finals, and according to basketball-reference.com’s Hall of Fame probability calculator, he has an 86 percent chance of being enshrined among the game’s greatest players ever.

It can be hard to find fault in his game. Early on, he was skinny enough to get pushed around in the paint, and wasn’t a great defender. Now, he is as good a finisher as anyone and is being discussed as one of the best two-way players in the game. I think his defense is overrated but rapidly improving. But the one thing that gives Durant so much firepower on the basketball court is also the thing that allows him to keep improving on both ends: his frame.

Seen as a potential hindrance early in his career—a 6’9” pole whose main skill was shooting from the perimeter—Durant’s size and skill combination has morphed into something unlike any seen maybe in the history of the game. His 7’4″ wingspan allows him to operate in the paint like some of the great power forwards of yore: Horace Grant, Kevin McHale, and even a young Kevin Garnett. He doesn’t quite reach Garnett’s defensive abilities … yet. But apparently being named Kevin is a pretty good start.

From the land where shots are worth three points, he operates like someone with not-quite Allen Iverson handles and Dirk Nowitzki’s jump shot in traffic. How do you guard that? This is how he can roll out of bed and accidentally score 25. When he is at all locked in, 30 is expected.

The fact that Kevin Durant is even vying (let alone in the lead) for MVP during the prime of LeBron James’ career is craziness. In January, Durant averaged 35.9 points, 6.1 rebounds, and 6.1 assists while shooting 54.9 percent from the floor. Like, what?

In NBA 2K14 (stay tuned to Baller Mind Frame for much more of this analysis in the future) when you put the greatest players of all time into a fantasy draft it unfolds thusly:

Comparing players across generations, rule changes and even collective bargaining agreements can be difficult. Players have different quality teammates, ownership, and responsibilities on the basketball court. But one thing that is not difficult to tell is that Kevin Durant is in rarefied air. The return of Russell Westbrook is likely to put a dent in Durant’s numbers and could maybe even cost him his MVP. But it will likely give him a much better shot at the stat that matters the most to his legacy: winning a championship.

This is the NBA, so on some level Durant will always have a ceiling in terms of historical comparisons until he gets at least one, and some might say at least two. It’s a tough curve to be graded on, but it also means that you have reached a point where history is more of a competition than your peers. Well, except that one guy Kevin Durant is sick of hearing about.

Maybe Kevin Durant should “Inception” LeBron to go play quarterback for the Cleveland Browns for two years so KD can Hakeem himself a couple rings.

Or maybe Durant is just getting warmed up. Michael Jordan didn’t win his first championship until age 27.