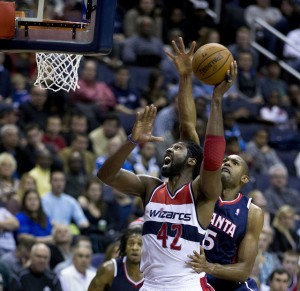 The Wizards’ playoffs-or-bust season has taken a serious hit. In a game against Cleveland on Sunday, Nene — Washington’s versatile starting power forward — went down with a left knee injury that rendered him unable to walk. Wizards officials initially feared that a torn ligament could be the cause, but on Monday an MRI revealed that Nene had suffered a sprained MCL. That bears a more hopeful timetable, though the Wizards announced in a press release that Nene is expected to miss approximately six weeks of action.

Although a sprained MCL is better than the alternative in this case, a six-week absence would run nearly to the end of the regular season. Supposing Nene isn’t delayed beyond that timetable, that would keep him out of Washington’s next 21 games — a slate of largely winnable games that just became far more challenging. Sports Illustrated

The Wizards were a playoff lock going into the All-Star Break. A first-round berth with the number three seed was attainable with Beal and Nene coming back from their injuries. John Wall openly discussed his optimism with on the B.S. Report in New Orleans during All-Star Weekend.

The frontcourt is very thin behind Nene. Plus, Marcin Gortat only has one season in which he has played more than 66 games out of his six seasons. They are not dead in the water but this eradicates any hope of home-court advantage in the playoffs. – AL