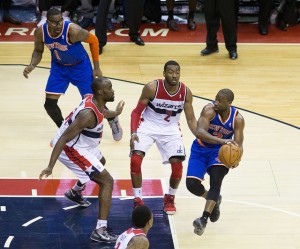 Knicks point guard Raymond Felton was arrested on three counts of criminal possession of a weapon early Tuesday after his estranged wife went to cops with his gun, sources said.

The struggling Felton was charged with second- and third-degree criminal possession of a firearm — all felonies — and an additional misdemeanor charge (fourth-degree possession), an NYPD spokesman said.

The 29-year-old Felton is slated to appear in criminal court in Manhattan later Tuesday morning.

The Knicks guard was cuffed when he turned himself in for questioning at the 20th precinct in Manhattan at about 12:50 a.m., just hours after the Knicks latest loss — this time to the Dallas Mavericks, 110-108, at the Garden. The eight-year NBA veteran in his second stint with the Knicks, scored eight points and had seven assists in Monday night’s loss.

Felton surrendered after a lawyer for his wife, Ariane Raymondo-Felton, 26, brought a Belgian pistol — an FNH 5.7×28-mm. — that belonged to the hoops star, sources said.

“She had knowledge that the gun was there,” the source said. “She said she didn’t want the gun there anymore.”