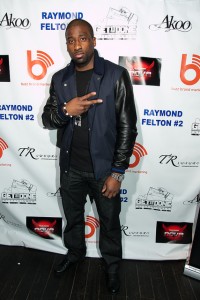 While Mike Woodson struggles to hold onto the head coaching position of the New York Knicks, he may be stressing certain aspects of the game too intensely towards certain players, and it may have triggered an unwanted response.

Raymond Felton may be able to attest to that.

After being arrested on felony gun charges late Monday night, perhaps Felton was merely taking Coach Woodson’s words to heart in an attempt to boost the struggling Knicks. Following the Knicks’ heartbreaking last-second loss to the Dallas Mavericks, Felton may have been putting in the extra practice to prove he can play up the caliber he has shown in the past. With a gym unavailable, perhaps he merely took his practice to the streets.

While details of the arrest are still being released, I believe that now is a more-than-fair time to speculate on Felton’s motives …

Perhaps Coach Woodson told him to “work on his shooting”

As he is shooting an abysmal 40 percent from the field this season, Felton may have thought that handling a gun may improve his in-game stroke. It is not yet known whether or not Felton was following his in-season trend and using the gun to shoot bricks and air.

Did Felton misunderstand Woodson’s pleas to improve his defense by not being afraid to “take a charge”?

With the Knicks struggling to make big defensive plays throughout the year, despite having defensive standout Tyson Chandler anchoring the middle, the Knicks may have begun preaching positioning and taking charges. While the charges of Felton’s variety involve him being in the wrong position at the wrong time, perhaps he was just trying to help the team?

Due to the Knicks’ poor positioning, they face an unfavorable matchup if they are able to reach the playoffs. Did Felton realize that the possession of a gun was the only way that he, or any of the Knicks, could “handle the Heat”?

It is no understatement that the Knicks would have trouble if they were to face the Heat in the first round of the playoffs, maybe Felton had the foresight to understand that he needed to think proactively.

Maybe Felton took the recent buyouts in a literal manner and believed that war was about to descend upon New York as Metta World Peace was let go by the team?

Or … with Felton being pushed so heavily in trades before the deadline, perhaps he realized that they may be gauging outside free-agent talent in an attempt to replace him and the brandishing of a firearm was merely just a warning to Gilbert Arenas to let him know that Agent Zero wouldn’t be getting a shot in New York unless Felton had something to do with it?

Regardless of the motivation behind Felton’s actions, it is a shame to see another NBA player end up in trouble with the law, especially on a struggling team such as the Knicks, as this will no doubt give more ammo to the team’s critics for negative newspaper, blog, and magazine content. At this point, you can’t help but wonder if the Knicks wish they had not bought out Beno Udrih in order to have some relative safety at the point guard position.