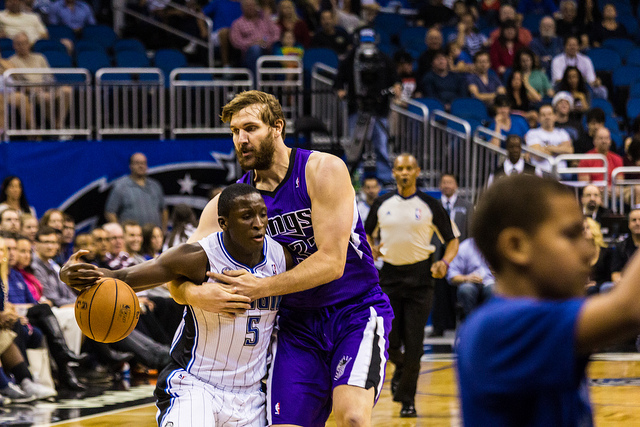 “When you grab a rebound, get it to a point guard.”

Those words were uttered to Victor Oladipo by his high school basketball coach.

You could say that Oladipo has time and time again been through the ringer. From being doubted as a five-year-old, being put on the purple team instead of the blue team, then helping his team go on to win the championship. He then dealt with not being highly recruited out of high school.

Oladipo didn’t get down. At Indiana he worked hard, he grew, and he turned into one of the most impressive players in the country, garnering First Team All-American honors. Oladipo was drafted second overall in the NBA draft and thrust into a new position. People said he couldn’t do it, he could never be a point guard. The athletic freak from the University of Indiana has been put through the fire and the flames, had his game picked apart by many, and yet he’s never lost confidence in himself.

After spearheading a spirited rally past the New York Knicks in double overtime—a game in which Oladipo scored 30 points and dished out a career-high 14 assists—he was given praise by one of his leaders and teammates. The veteran Jameer Nelson, who has been mired in a shooting slump, praised the rookie for his level of play. “[H]e has the capability of being a great player in this league. He’s going to continue to learn and we’re going to continue to support him and help him,” Nelson said. “[H]e has a motor; a lot of people don’t have the same motor that he has. By that, I mean he just keeps coming, keeps coming at you at both ends of the court.” The veteran point guard and mentor for Oladipo finished by saying, “[H]e’s aggressive at both ends of the court and I think that’s going to separate him from a lot of guys.”

Nelson isn’t the only person in the organization that has praised the former Hoosier for his high level of play. Head coach Jacque Vaughn had this to say when asked about the rookie after the win: “[H]e was special. It was fun to be a part of.” Vaughn also praised Oladipo for his energy level in the second half, which he attributed to Oladipo sitting for much of the second quarter. “He played a lot of the first and the beginning of the second a little bit and I didn’t put him back in before the half hoping that he would have a lot of juice for us in the second half and boy did he have a lot of juice. Just getting to the rim and just making big plays defensively. He sparked us with two breakaway steals. He was good in a lot of ways.”

Fellow young gun Kyle O’Quinn was also very complimentary of the Indiana product. “Yeah, he never stops. Even when he messes up, he’s going to show us he’s real confident in his game. So, that’s good.”

It’s not only his teammates and coaches who are raving about the Hoosier’s play, but some of the game’s biggest names as well. After his Indiana Pacers lost to Oladipo and Co., rising star Paul George had this to say about the rookie: “He is special. You are going to get nights like this from him. The more that he is going to be in this league, there is going to be much more consistent nights like this. He has a high motor and I am a fan of his game. He is one of those guys that play on both ends of the ball. Those guys are rare in this league.” Knicks high-scoring forward Carmelo Anthony commented on how “Oladipo stepped up big time.” He also talked about how Oladipo was able to beat them on the pick-and-roll and how his big and-1 dunk all but sealed the game for the Magic.

Not only have others players raved about Oladipo, opposing coaches have as well. Many have talked about how he can be a special player in this league and will continue to get better everyday. One coach, Memphis Grizzlies leader Dave Joerger, stuck out. Joerger talked about Oladipo as if he were a pretty girl at prom, gushing about how much he loved his game and the type of player he is.

All the doubting aside, Oladipo is morphing into one of the most promising young players in the game. His blazing speed and quick agility coupled with his athletic ability make him a menace, not only in the open court, but in the more traditional half-court settings as well. However, he’s not yet done, he needs to become more comfortable going left, which he was able to joke about, saying, “hopefully this summer I can get a left hand.”

Through all the trials and tribulations, through the electrifying high-energy moments, one thing hasn’t gone away: Oladipo’s confidence in himself. While he’s surprised some, he is nowhere close to where he wants to be as a player. The rookie said, “I’ve come a long way, I’ve gotten better since then (Summer League) and still have so much room for improvement. I can get so much better. I really feel like I haven’t scratched the surface of the player I can be.” He went on to say that he hopes to “become one of the greatest to ever play this game.”

It’s still very early in his career and he has an exponential amount of growth to go, but Oladipo is shaping into the franchise player the Orlando Magic are looking for. Through thick and thin, he’s proven he can play the game at a high level, proving all the doubters wrong. Now, he can continue to prove them wrong as he grows.