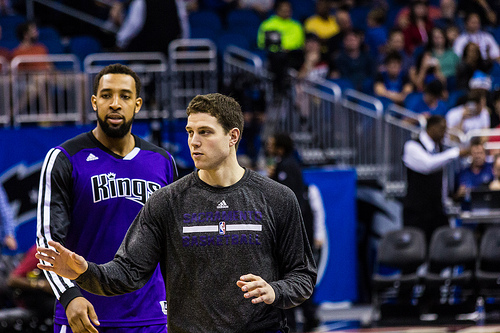 It’s been harped upon to the fullest extent in the modern era of basketball, but the idea is still painfully relevant: The NBA, for all intents and purposes, is a league composed of expectations. Expectations for franchises, expectations for players, expectations for mass financial gain. Through all the expectation on which this league has been built, none is greater than on the 19-year-old men entering the professional ring in a sport which they have always dominated.

The problem with the impossibly large expectation on draft picks is that the league, as a whole, expects each and every one to be as great as they have been in all other levels of the game. The fact of the matter is, sadly, that a league which houses only 450 of the game’s best is going to have the occasional player who does not become successful. The arrival of  rookies, no matter what the masses say, are unfairly looked upon to evolve the face of an entire professional basketball franchise. It is an unfair and impossible expectation to put on the back of a player who has yet to find his place among the best in the world; many players fall short of the reverent greatness. Jimmer Fredette is one of these players whose stand with the Sacramento Kings has proven what many other young players have, too.

It seems unrealistic to pose such insane expectations on the back of men, many of whom can’t legally buy a drink at a bar but are expected to give an entire city of people playoff hopes and consistent production. It seems unrealistic to expect a new professional athlete to be as dominant as he has been since his first AAU circuit, to expect him to beat his opponent each and every night to the fans’ avail. It seems unrealistic to hang the possibility of joblessness over the head of an athlete pushing himself to the highest extent of measurable will in the event that he can’t be great in the NBA. More than anything, however, it seems unrealistic for a player to bounce back from a three-year stand at a team which has been nothing but a cancer to his professional career. All of these things are incredibly unrealistic, and all are done to almost every high-profile rookie.

Jimmer Fredette was one of them.

Today, Fredette’s unflattering three-year span of immeasurable potential and measurable disappointments is nearing its end. Unless a wildly unlikely surprise occurs in the negotiation process, the Sacramento Kings will buy out Fredette’s remaining contract and the former BYU superstar, whom many called the best shooter on the face of the planet, will be a free agent. He’ll be forced to do all he can and hope another franchise will come along and sign him for the player he is, not the player he used to be.

It is all too easy to get hung up on who a player is supposed to be. The NBA, in its entirety, wants to be its own perfect world in which every story is a successful one and the conviction of failure is non-existent. It is the stuff of greed to want such crazed success in each new face in the NBA spectrum. Fredette’s beginning in Sacramento was marked by nothing more than a selfish desire for the old BYU player to have exact success in a completely different game. His career in Sacramento has been nothing but disappointment and the saddest part of all is that fans brought it upon themselves. Nobody surrounding the Kings organization saw or gave Fredette the opportunity he needed to play to his full potential, whether or not it matches his talent in a BYU uniform.

He has no defensive game, he was sloppy with the ball and his turnovers added on to the already apparent offensive struggles Sacramento has been plagued with long before the Michael Malone era. But one thing is perfectly clear: Jimmer Fredette deserved more. He deserved more minutes, he deserved a bigger role and he deserved more than half a season to decide whether or not he was cut out to be a starter on the biggest stage in basketball.

Through sheer ignorance and an impossibility to please the selfishness surrounding every young player’s incredible expectations, he got none of this. That is why I think Fredette has made the best decision of his career in opting to leave Sacramento. It’s a career that needs saving, and leaving Sacramento was a necessary step in the right direction.

The fact that he approached the organization to leave is a positive signal to other prospective franchises interested in what is an extremely talented player.

The ideal position for Jimmer would be a high-scoring offense, focused primarily on pushing the ball in transition and spreading the floor open with three-point shooting. The most essential prospect for the personal success of Fredette is a team which lacks depth at the point guard position, as the allowance of Jimmer to play at least 25 minutes a night is the only way to bring about the player he really is. It’s easy to look at his numbers now and inevitably toss them aside as nothing more than the makeup of a mediocre bench player, incapable of much more than giving actual contributors a rest once or twice in a game. But per 48 minutes, Jimmer’s offensive statistics are all but mediocre.

Obviously, the possibility of Jimmer landing in a position which immediately plays him 40+ minutes per game is nearly impossible, but the potential for big offensive numbers is apparent. To go with his lacking defense, he doesn’t quite have the handles of an ultra-successful point guard in today’s NBA, but it is obvious that Fredette, if put in a position with more minutes and more opportunities, will destroy any of his previous statistics and could be a solid NBA point guard.

A team which has already expressed interest in Fredette—and is quite possibly the best fit—is the New York Knicks. It’s a losing team, mind you, but the essence of New York basketball is just as apparent this year as in more successful past seasons. The most applicable piece of evidence for New York’s case is the lack of depth at the point guard position. Raymond Felton stood alone as the Knicks’ only legitimate chance at a productive point guard, but he could also be facing two to seven years in prison as a result of his recent conviction. The legal process is still only beginning, but New York is still in need of a solid point guard who could see starting minutes in the near future.

Fredette needs this situation. He needs a team like New York with a clear cut leader in Carmelo Anthony, a superstar and one of the best players in the league, to give Fredette’s game one single, solitary ounce of direction. He saw none of that in Sacramento, as the locker room situation from Keith Smart’s indecisiveness to the annoyance of DeMarcus Cousins’ outlashes provided what has been the absolute worst situation in the NBA for player development.

Sacramento has been nothing short of abysmal in giving new rookies a sense of opportunity and understanding in the learning process which the NBA, just like any other professional sporting league, requires. It was an explicitly wrong situation for Fredette to play in. This team has not been understanding or nurturing at any point in Fredette’s career, and as a result the franchise lost what will prove to be a good NBA player, and it absolutely deserved it.