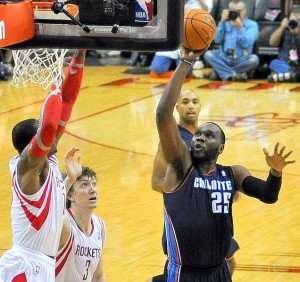 Newly appointed NBA commissioner Adam Silver claims that there is “no evidence to suggest that teams are tanking.” That may hold true solely for the New York Knicks, because they’re without a first-round pick. But with all due respect to Mr. Silver, the Philadelphia 76ers, Boston Celtics, Milwaukee Bucks, and Orlando Magic have already purchased their tickets for the Joel Embiid, Andrew Wiggins, and Jabari Parker sweepstakes.

In the mist of NBA franchises fighting for the worst record, Charlotte Bobcats first-year head coach Steve Clifford has his team fighting to reach its full potential. The fulfillment of this current roster is competitiveness and a possible playoff appearance.

A couple of seasons ago, the 2011-12 Charlotte Bobcats were best at being the worst, setting an NBA record for only winning seven games in a 66-game season. Of that team, only Gerald Henderson, Kemba Walker, and Bismack Biyombo remain. However, this season players have bought into Coach Clifford’s defensive philosophy (currently sixth in NBA team defense), which keeps them in games almost every night, making the possibility of not making the playoffs almost unthinkable.

Gerald Henderson continues to play steady at both ends of the floor; Michael Kidd-Gilchrist has become a defensive spark and brings energy every night; and Kemba Walker, Eastern Conference Player of the Week (February 17-24), has led the Bobcats to a 4-0 record in that span. He has developed into a point guard that is ready, willing, and able to not only take, but also make the last shot.

In previous seasons, the Bobcats have possessed good complementary pieces, but lacked a skilled big man that can score and rebound, and be the centerpiece that could take Charlotte to the next level.

Insert free-agent acquisition Al Jefferson into the mix. Jefferson will be the reason the Bobcats make the 2013-14 playoffs, period. He has dominated the low post all season long. Al Jefferson is the only player in the Eastern Conference averaging 20 points and 10 rebounds a game, an obvious All-Star oversight. The nimble Jefferson has given opposing teams fit, forced to double-team him in the paint and resulting in clear lanes to the basket and open shots.

Most big men struggle at foul shooting, but Big Al sports a career 71 percent from the free-throw line. Patrick Ewing, associate head coach and Hall of Fame player, will help Al mature in the post by recognizing efficient scoring opportunities and being cognizant to pass the ball before defensive traps are set. Al Jefferson is vital to establishing the Bobcats’ new offensive identity.

Being a top-10 defensive team helps in winning games, but controlling the low post makes a team tough to beat in a playoff series. The Bobcats completed a deadline trade for former San Antonio Spur Gary Neal, a career 43 percent three-point shooter. The anticipation is that Neal will complement the low post effectiveness of Jefferson. The trade is expected to improve Charlotte’s outside shooting, as the Bobcats continue to make a surge for the playoffs.

As the regular season comes to an end, the Cats are playing with a greater sense of urgency to make it to the postseason. Even if Charlotte finishes with a losing record, making an appearance in the playoffs would make this season a success.