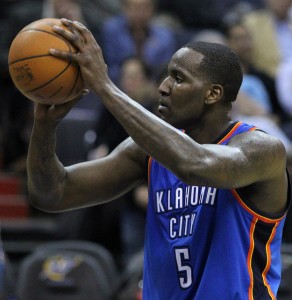 The Thunder got their starting lineup back for the first time in weeks against the Heat.

But they only got to have it for a half, as Kendrick Perkins will miss up to six weeks after procedure on a strained left groin, the team announced Tuesday.

Perkins was injured early in the third quarter while setting a screen. He immediately exited the game and did not return.

The Thunder started rookie Steven Adams in his place against the Clippers on Sunday and will likely stick with him as the starter until Perk returns. Adams has shown flashes of being a stellar big man, but he’s raw and inexperienced. CBS Sports

Media pundits everywhere have been begging Scott Brooks to sit Perkins more often in favor of small-ball lineups. Advanced stats gurus point to the numbers and say that Perkins is a detriment on the court unless he is on the court to defend an elite big man. This upcoming stretch without Perkins will be used to decide if this is a valid point which would be a mistake since Russell Westbrook’s integration back into the lineup is a larger conundrum.

The Thunder have never been known for the play of their big man so it’s hard to say how much of a problem this will be. Serge Ibaka is a great off-ball defender but struggles defending post up scorers one-on-one. This won’t be a big deal unless Perkins misses playoff games. The Thunder can win most games by simply outscoring teams so I don’t expect to learn much from his absence. – AL