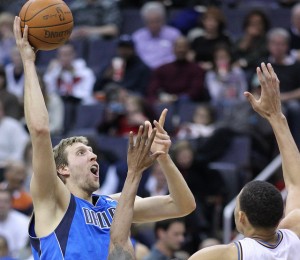 Within the first shot of the game, things looked suddenly grim for the Dallas Mavericks. Power forward Dirk Nowitzki appeared as if he tweaked his shoulder after making the first points of the game against the New Orleans Pelicans and disappeared into the locker room. The panic fog that hung over the fans inside American Airlines Center didn’t last too long, lifting when Nowitzki returned to the game minutes later.

However, Anthony Davis and the Pelicans looked to take advantage of the All-Star’s careful playing after his return, and took a 27-20 lead in the first quarter of the game. But during the final minutes of the first half, the worst case scenario played out when their star forward injured his left shoulder in a failed rebound attempt. The Pelicans have already been plagued with injuries all season, but the loss of Davis is almost as terrifying as trying to understand a Charles Barkley rant after he’s had a few drinks.

Dallas took advantage of Davis’ departure and went on to dismantle New Orleans, beating them 108-89. After the loss of Davis, the Pelicans cheaply folded and began to play as if they had been out partying with the cast of “Animal House” the night before. They staggered through their fifth straight loss due to 21 turnovers while shooting 50.7 percent from the field.

Lead scorer of the night was Dallas guard Monta Ellis, who put up 23, followed by Nowitzki with 18. Vince Carter tossed his AARP card out the window and led all scorers with 11 points during the first half (17 total). Guard Eric Gordon gave the overwhelmed visitors 19 points while Alexis Ajinca had 14 points off the bench.

This win managed to push them ahead of the Golden State Warriors (along with the Warriors’ loss 103-83 to the Chicago Bulls – who the Mavericks face next in Dallas on Friday) in the Western Conference playoff standings. Fact remains that the Mavs need to stay healthy in order to continue their pursuit past the best in the West, hence why fans couldn’t help but clinch up when it looked like Dirk grabbed his shoulder in pain. Would they be able to continue their winning streak if he was injured?

That’s simply not a question Mavericks fans care to ask.