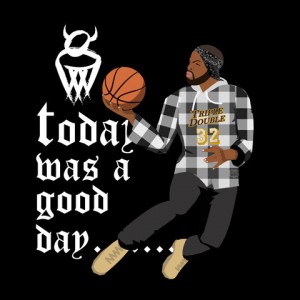 Which M.J. caused Ice Cube to say “It was a good day?”

“Get me on the court and I am trouble

Last week messed around and got a triple double

I can’t believe, today was a good day.”

“It Was a Good Day,” by Ice Cube, circa 1993, is a classic hip hop song, where the fore mentioned lyrics have been routinely used for ESPN’s Sports Center anytime a player notches a triple-double in the NBA.

A ‘Triple-Double’ is logged when a player records 10 or more in three of the following categories: points, rebounds, assists, steals, and blocked shots. In the 1961-62 season; Hall of Fame inductee, Oscar “The Big O” Robertson became the only player in NBA history to average a triple-double for an entire season, with 30 points, 12 rebounds and 11 assists.

If you ask people who Ice Cube is referring to as M.J., most would say Michael Jordan. Jordan is commonly known as M.J. But there is another M.J.—Ervin ‘Magic” Johnson, that hails from the City of Angels and was the conductor of the Los Angeles Laker’s Showtime.

There is no question that Michael Jordan had scoring prowess. He made “The Shot” against Craig Ehlo of the Cleveland Cavaliers in the 1989 Playoffs. Then, there was the baseline deception move versus John Starks and Charles Oakley and the most emphatic dunk on Patrick Ewing and of the New York Knicks in the 1991 playoffs. Who can forget Marv Albert’s excitement during the 1991 NBA Finals when he declared it was “a spectacular move” after Jordan switched hands in mid-air to finish a layup over Sam Perkins? This led The Chicago Bulls to their first championship, beating Magic and The Lakers. Yet, with all of his exhilarating moves, Jordan is not known for getting triple-doubles.

Magic Johnson was performing tricks and illusions a half decade before Air Jordan entered the league. He enchanted the NBA as he cast a spell over his fans. As a rookie in the 1980 NBA Finals, he personified greatness. He led his team to victory over the Philadelphia 76ers and Julius “Dr.J” Erving by playing all five positions in the game – scoring 42 points, grabbing 15 rebounds, and dishing 7 assists. The 19 year old Johnson was named NBA Finals MVP. The Junior Sky-Hook shot that beat Larry Bird and the Boston Celtics in Game 4 at the Boston Garden in the 1987 NBA finals. Magic Johnson captivated arenas around the league with his bag of tricks complete with full court, ally-oop, no-look passes and dribbling wizardry. At 6 feet 9 inches, Magic combined the size of a power forward, the moves of a small forward, and the sleight-of-hand dribbling of a point guard. This unique gift made him a consistent triple threat for a triple-double.

There has been much conjecture about who Ice Cube is actually referring to as M.J. Cube is a diehard Los Angeles Laker’s fan and reps the West Coast all day. For the record, Magic has totaled 138 career regular season triple-doubles, with an additional 30 in the playoffs, and is only second to Oscar Robertson’s 181 triple-doubles in NBA history. Jordan has a career total of only 28 triple-doubles. There is no question that Jordan has dominated many on the hardwood with aerial acrobatics at the basket and countless game-winning shots. He was a flat-out scoring machine. But once again, he was not known for logging triple-doubles.

Only Ice Cube knows which M.J. he was referring to at the time of writing his lyrics. But don’t be surprised if you find out that he was keeping it real with Laker Nation and gave a shout out to Magic. After all, Cube also has a line in the song where he said, “The Lakers beat the Supersonics…”