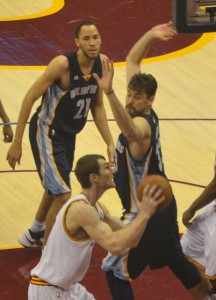 As the Cleveland Cavaliers continue their push for a postseason berth, a mostly overlooked big man is proving to be a key contributor for the Wine and Gold.

Now in his second season, Tyler Zeller, the 17th pick in the 2012 NBA Draft, is establishing himself as an impact low post player.

The North Carolina graduate was at his best in mid-February, registering 18 points, 15 rebounds and a block in a road win against the Philadelphia 76ers. Prior to the Cavaliers’ Friday night win against the Utah Jazz, Zeller was averaging 9 points, 6 rebounds, and 1 block over the previous 10 games. Zeller’s sophomore surge has coincided with Cleveland wins in 8 of 11 contests.

Thus far, the seven-foot center has outplayed his younger brother Cody Zeller, the Charlotte Bobcats’ fourth overall pick in the 2013 draft. Cody was viewed by many as one of the safer picks in June’s draft. The younger Zeller is averaging just five points and four rebounds a night in just less than 17 minutes a game.

Meanwhile, Tyler is posting a PER of 15.0 this year, up from 11.0 last season. Zeller’s solid season and February surge have been especially important with starting center Anderson Varejao having missed the team’s last nine games.

Zeller and newcomer Spencer Hawes (acquired from Philadelphia at the NBA’s trade deadline), have solidified the 5 spot for a Cavaliers team that now sits just four games out of the Eastern Conference’s final playoff spot.

Cody Zeller may have been a lottery pick, but older brother Tyler’s recent play has the Cavs cashing in.