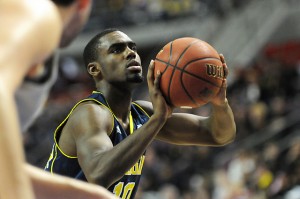 It has been an interesting season so far for the New York Knicks.

Currently at 21-39, the Knicks have lost six in a row and are in need of a spark to help ignite a playoff run. That spark is currently on their roster, and is the rookie Tim Hardaway Jr. The first-year shooting guard from the University of Michigan is just what the doctor ordered for a late-season surge. After a breakout performance in the NBA Rising Stars game, where he scored a game-high 36 points including 10 in a row, the young Knicks guard is ready to follow in his father’s footsteps and lead the Knicks to victory. Where did his game begin? Let us take a deep dive into the Knicks’ best chance at a playoff berth this year.

Tim Hardaway Jr. went to Miami Palmetto High School where he began focusing on basketball during his sophomore year. At 6’3.5″ and 175 pounds, Hardaway was actually not ranked in the Rivals Top 150 until the Florida State Championship against the Pine Crest School and Brandon Knight. During this game Knight scored 36, but was out-shined by Hardaway’s 42. After the game received national attention, he quickly shot up the rankings and was listed by ESPN as the 93rd best player in the country and 28th best shooting guard in the class of 2010.

During his junior year of high school, Hardaway began training with Ed Downs, whom he worked with every summer up until he became an NBA draftee. In this same year the school that first contacted Hardaway, Michigan, invited him for an unofficial visit to watch the Wolverines play against No. 4 Duke, a game where Michigan pull a surprised upset and beat the Blue Devils. The summer leading up to his senior high school season, Hardaway Jr. attended Elite Camp in Ann Arbor, Michigan. He excelled while attending the camp and was given an offer to play for the Wolverines, which he accepted. He would finish his senior year of high school a first team All-City selection, averaging 31.7 points 7.3 rebounds and 4.0 assists.

In his first game as a member of the Michigan basketball team, Hardaway Jr. led the team in points with 19 against South Carolina Upstate. It was here that the coaching staff knew that he was the real deal. He would go on to collect four Big Ten Freshman of the Week awards. At the end of the season Hardaway Jr. led the team in scoring at 14.9 points per game, steals at 1.17 per game, and three-point shots made at 2.56 per game. He was named an honorable mention All-Big Ten selection, and was one of 21 players selected to the CollegeInsider Freshman All-America team.

While is junior year continued at Michigan, Hardaway Jr. continued his excellent level of play, including a six three-pointer performance against Ohio State on February 5. Michigan would go on to make the NCAA Tournament and the championship game where they lost 82-76. In that game Hardaway Jr. contributed 12 points, 5 rebounds, and 4 assists. He ended the season a first team All-Big Ten selection and the darling of Michigan Wolverines basketball before declaring for the NBA draft on April 17. Hardaway would go on to be selected 24th overall by the New York Knicks.

Fast-forward to today and Hardaway Jr. has grown to 6’6″, 199 pounds, and is averaging 9.8 points a game in his rookie season. With all the woes in New York, the Knicks should capitalize on having such a great young talent on their team and play Hardaway Jr. more to develop him and spur a late-season playoff push. The Knicks, and Carmelo Anthony, need all the help they can get, and Hardaway Jr. is the right man for the job. With a smooth shooting stroke, good size, and high basketball IQ, Hardaway Jr. can provide much needed depth to a struggling Knicks team.

Late season surprises can always happen, and with Hardaway Jr. in a Knicks uniform he may be the piece they’ve needed all along.