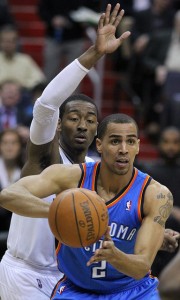 The Oklahoma City Thunder just signed Caron Butler after he was bought out from his contract with the Milwaukee Bucks. It may have been just in the nick of time too. GM Sam Presti told the media on Sunday that Thunder wing Thabo Sefolosha had an MRI on his calf injury. Sefolosha will be out for four-to-six weeks with a calf strain.

Sefolosha has been one of the lineup fixtures for the Thunder this season. He’s fourth on the team in minutes and has averaged 26.4 minutes. While his scoring and production certainly don’t jump off the page at you, his role is very important for a team looking to get back into the NBA Finals. Sefolosha averages 6.7 points and 3.7 rebounds while shooting 42.5 percent from the field and 33.8 percent from 3-point range. CBS Sports

Sefolosha should be back just in time for the playoffs. Calf injuries tend to linger for athletes in all sports even after they become active. This bears watching but he should be able to contribute in an effective way upon his return. – AL