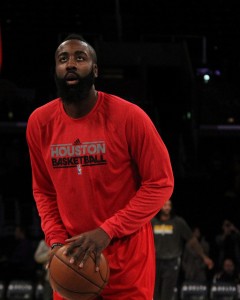 Image courtesy of Derral Chen/Flickr.
James Harden lead all scorers with 31 points propelling the Houston Rockets to victory over the Orlando Magic

Facing former franchise cornerstone Dwight Howard for the second time since he left the team, the Orlando Magic were yet again unable to get a victory. This time the Houston Rockets, coming off a big win against the Miami Heat on Tuesday, took down the hosting Magic. Houston rallied in the second half to take home a 12-point victory, 101-89 on Wednesday night.

The first quarter was a big one for the Magic. Shots were falling from everywhere, and they were suffocating the Rockets defensively. Orlando controlled every aspect of the game except rebounding in the quarter, helping them grab a big 13-point lead, 32-19 after one.

The second quarter was very different for both teams. Houston surged, knocking down shot after shot, while the Magic went ice cold from the floor, shooting an abysmal 7-of-24 in the quarter. While Houston was able to fight and claw their way back into it, a late three from Maurice Harkless gave the Magic a seven-point lead, 48-41 going into the break.

Coming out of halftime, Houston appeared to be a team possessed. A quick 8-0 run allowed the Rockets to get their first lead since early in the contest. Orlando, staying as resilient as possible, kept the game close for much of the quarter, swapping baskets. However, it wasn’t enough as the Rockets looked to be grabbing the game by the horns, taking a 10-point lead into the final quarter, leading 75-65.

In the final period of play, Orlando started quickly, cutting the Rockets lead to three early in the quarter. Unfortunately for the Magic, the Rockets answered, pushing the lead right back up to double digits almost before you could blink. Houston, thanks to a big final period from James Harden, coasted the rest of the way.

Houston was led by a big night from their All-Star shooting guard Harden, who finished with a game-high 31 points on an efficient 11-of-19 shooting. Orlando native Chandler Parsons, who had roughly 100 friends and family members in attendance, burned the Magic often, finishing with 19 points, 7 assists and 6 rebounds. Joining Parsons with 19 was former Magic center Dwight Howard, who also finished with 14 rebounds. Electrifying young forward Terrence Jones rounded out the Rockets in double figures, finishing with 17 points and 10 rebounds.

Orlando, playing without starting point guard Jameer Nelson and rookie Victor Oladipo, struggled to keep getting buckets consistently Wednesday night. Sharpshooter Arron Afflalo returned from a recent hiatus due to an ankle injury and illness to score a team-high 18 points, but looked hobbled throughout the game. Lanky forward Maurice Harkless scored 15 points and added five steals. Big man Nikola Vucevic notched yet another double-double, pouring in 15 points and grabbing 10 rebounds. Tobias Harris was the final member of the Magic to finish in double figures, contributing 10 points on the night.

For the first time all season, the Magic were without their first-round pick, Victor Oladipo. Oladipo, who missed the game with a sore left ankle, was the only Magic player to have appeared in every game this season prior to tonight. The Magic clearly missed his play making ability and tenacity defensively against a high-powered Houston team. The injury wasn’t something serious, so sitting Oladipo was more of a precaution. It would be surprising if the fiery competitor in Oladipo wasn’t on the court when the team plays the San Antonio Spurs on Saturday night.

The storyline for many was the return of Dwight Howard. The media flocked to him pre-game, yearning to get that one quote from him they could use. The fan reaction? Howard was boo’d every time he touched the ball, and when the team played a video tribute thanking him for his services’ with the team. Howard was able to let his game do the talking, finishing with another big double-double, while dominating inside, helping Houston cruise to the victory.

“Activity. We’ve been stressing activity and defense and he’s been stepping up and doing that. We want him to continue to rebound the basketball and continue to get out in the lane and use his athleticism to give us easy buckets. He’s been doing a good job of playing on both ends of the floor.”

Orlando struggled in the pain, shooting 13/33, for 26 points compared to the Rockets who finished 29/46 in the paint for 58 points.