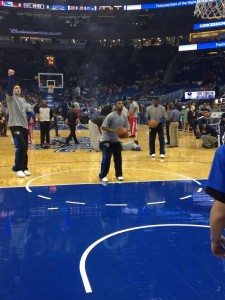 From going to Utah Valley State and being there as it transitioned from a community college to a university, to backing up some of the biggest names at point guard in the league, Ronnie Price’s journey has been a long one. Price, in his ninth season, has never been one to put up the big numbers, but has always graciously accepted any role he’s been given. This year, with the Orlando Magic, is no different.

Ronnie Price has never been known to be a big scorer of the ball, but more of a high-energy, defensive-minded player. With the Utah Jazz, Sacramento Kings, Phoenix Suns, Portland Trail Blazers and now Orlando, Price has never averaged more than 4.3 points per game, averaging a mere 3.4 for his career. His defensive numbers, most notably his defensive win shares, point to the side of the ball Price thrives on. The lightning in a bottle has 4.7 defensive win shares for his career, compared to -2.8 on the offensive side of the ball.

Price, whom the team signed in the offseason, was brought in mainly to be a veteran presence in a relatively young locker room. He wasn’t expected to play much, but more be there in case of injury to starter Jameer Nelson, who hadn’t played a full season in his nine previous years. Price has adapted to the role well, and when his number is called, he’s always ready to play.

Throughout the season when asked about Price’s play, coach Jacque Vaughn has praised him for his ability to always be “ready” no matter what the situation may be. “Can always count on him, his ability to defend the basketball. He had some looks that didn’t go in, but I think overall his energy throughout the course of the game he was great and overall he was pretty good guarding Eric Maynor who gave us some trouble in Philly,” Vaughn said after Orlando’s Sunday victory of the Philadelphia 76ers.

Prior to the team’s bout with the Houston Rockets, I talked with the former Utah Valley Wolverine and asked him how important it is for him to always be ready when coach Vaughn calls his number, even if he isn’t getting consistent playing time. “It’s very important,” he said. “It’s our job as a professional to be prepared for any scenario that comes along and I’m a professional so with that being said, it’s our responsibility, it’s our job, you know it’s just part of being a pro.”

Price, who has backed up the likes of Mike Bibby, Deron Williams, Steve Nash, Damian Lillard, and now Nelson, feels as though he’s had a “interesting career.” The veteran said, “I think I’ve played behind All-Star point guards my entire career.” He went on to say, “It’s been a learning experience for me because I’ve been able to see so many different great point guards and I’ve been able to learn and see what’s made them successful and then also find my niche and my value in this league.” He finished by saying he can’t step in and be the person in front of him, but just the player that he is and get the job done and win while he’s on the floor.

Ronnie Price was also very complimentary of guard Victor Oladipo, who is transitioning from predominantly playing the off guard position in college to learning the point guard position at the NBA level. Price said that “[H]e’s seen a lot of growth each week I’ve seen a change in his approach to get better at something that he’s worked on that previous week and I see it translate to the games.” Price also told me he thought that was the hardest transition for any player: coming out of college as an off guard and trying to learn point guard in the league. “I think by far that’s the hardest transition to make and with that being said I think he’s proven that he’s a hard work and he’ll have success in this league for many years to come.”

While he may not be playing major minutes or contributing big numbers for the team, Price is still important to their growth and success. He sets a good example for the young guys of why it’s always important to stay ready for his number to be called. The journey has been a long one, and he’s played many roles, but one thing is for sure with Price, his role with the Magic, while minuscule at times, is very important.