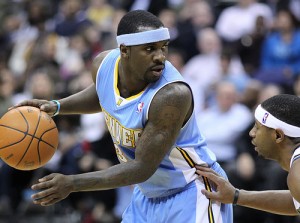 It’s understandable that it is notoriously difficult to play in Denver due to the city’s high altitude, however the Dallas Mavericks managed to look like the basketball equivalent of gas station sushi during Wednesday’s game–dangerously iffy.

Okay, so sometimes even the finest team’s defense performs their own variation of “The Invisible Man” every now and then, but it becomes a different story the closer to the playoffs a team gets, especially if that team is busy clinching one of the last two playoff spots in the Western Conference.

The Mavericks (26-34) lost their third-straight game to the Denver Nuggets (who snapped a six-game losing streak and are now 3-0 against Dallas), their first of the season. With this 115-110 loss, Dallas slides into eighth in the West.

The Mavs knew they would have their work cut out for them at the subdued Pepsi Center because the altitude affects the rotation. Even though Dallas’ bench ended up scoring 17 points in the first quarter, they couldn’t take back their only lead of the game (4-2 at the start). The Nuggets (26-34) had a crippling third quarter when they shot 4-of-26, bringing the Mavs within six (nearly closing a 17-point halftime lead) at the end of the third. Denver then went on a 16-2 run at the start of the fourth and, while Dallas gave them a late scare with 30 seconds remaining, the Texas team just appeared to throw in the towel by allowing late free throws down the stretch in the final seconds. And it certainly didn’t help that forward Wayne Ellington was excused from the game by coach Rick Carlisle for “personal reasons.”

Top performers for Denver were Wilson Chandler (with 21) and Ty Lawson (with 20), while Dallas’ Dirk Nowitzki’s 27 points couldn’t carry his team. While tonight’s loss was just as cringe-worthy as watching your girlfriend chew Jell-O in order to swallow it, beating Denver wasn’t necessarily dire for the Mavs (even though every game right now can be considered a large one).

However, their upcoming games certainly are.

After their loss to the San Antonio Spurs on Sunday, All-Star Nowitzki charismatically joked that Dallas does not “want to see anyone” in the playoffs. Perhaps a playful attitude toward their 0-6 record against the top five teams in the Western Conference isn’t the best route to take. The Mavericks face the Portland Trail Blazers at the American Airlines Center on Friday, the Eastern Conference-leading Indiana Pacers on Sunday, and then the Golden State Warriors on Tuesday—three very strong teams.

If the Mavericks want a shot at securing a spot in the playoffs, they need to find their energy early and keep the momentum going, especially in order to victoriously survive their next three games.