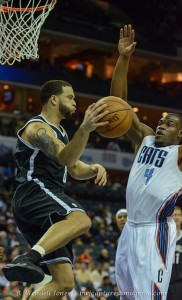 Image courtesy of B Wendell Jones/Flickr.

The idea of who is a contender and who is not is always relative. Relative to the competitiveness of the league in that given year and also how good the best teams are.

When applied to this season, who is a contender is also relative to conference. If a team is in the East then it is much easier to mask as a contender with a .500 record than in the West, where a .500 record will find a team out of the playoff picture.

Just ask the Minnesota Timberwolves, who are currently 30-30 and five games out of the eighth spot.

Back to the Eastern Conference, specifically the Brooklyn Nets.

After a 10-21 start and talks of Jason Kidd not being fit to coach in the NBA, the Nets are 20-8 since and sitting in the sixth spot in the East.

That puts them at 30-29, just .5 games ahead of the T’Wolves if Brooklyn was in the West. All this goes back to talk of relativity, and sometimes being lucky to be in such a weak conference. Lucky in the sense that the playoffs are reached easier, but this does not mean championships are any easier to win.

In fact, playing in a weak conference can actually make a team look better than they actually are. Three or four games against the Philadelphia 76ers, Milwaukee Bucks, and Orlando Magic are treats for Eastern Conference squads. This is not trying to take anything away from their success this season but it certainly does improve their record. (The idea of a weak conference making a team look better does not apply for the Indiana Pacers and Miami Heat. They have proved themselves against the top teams in the league and also against each other in the past few years. There is no questioning their respective dominance in the league).

For the Nets, it is unlikely that they would stand a chance at advancing past the first round in the West. With their current situation in the East, they will likely meet up with the Chicago Bulls, Washington Wizards, or Toronto Raptors in the first round. They may be able to beat the latter two, but the Bulls would be a tougher series.

It’s a bold statement, but it would be a long shot to pick the Nets in that series, especially with the way the Bulls are currently playing. The fact the Bulls are playing without Derrick Rose and Luol Deng and still playing the way they are is a long and intriguing story in itself.

Labeling the Nets as a contender would be wrong. They will make the playoffs and could even be one of the top four seeds if they can pass the Raptors in the Atlantic Division. Even with a first-round win they would have to face either the Heat or the Pacers in the second round, and both of those teams can practically begin to plan for the Eastern Conference Finals. The series would be short, with the Nets possibly taking one or two games if lucky.

It would be great to say that a playoff series victory would be good for the team going forward, but a roster as old as the Nets needs to win now. At this point in time, that is simply not a possibility.