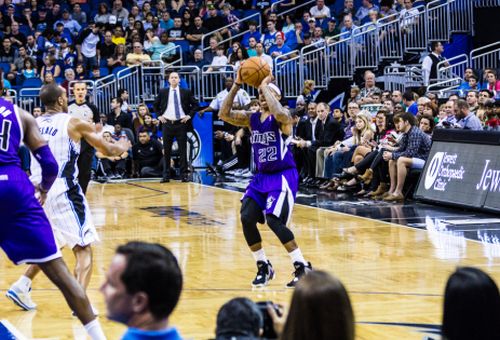 At 5’9″, Isaiah Thomas initially stands out on a basketball court for his physical disadvantage. Opposing point guards usually measure in at a half foot taller than him. Within that small frame, however, is packed a strong punch.

Thomas is kinetic energy personified. He’s one of the quickest players in the NBA and has a seemingly endless fuel supply to power him across the court on a whim. With the ball in his hands he looks like a fox outrunning a pack of hounds, agilely changing speed and direction as he maneuvers his way through and past defenders.

That combination of speed and energy makes him a blur on the floor.

Thomas’ velocity can make him a frightening defensive assignment, but may also seem limiting in ways. The momentum with which he constantly plays would, for example, presumably make stopping on a dime and then accurately firing a 24-foot jumper nigh impossible. You can’t sit up straight while you slam the breaks of a Ferrari in fifth gear—inertia takes hold, dragging you forward like a crash test dummy.

Thomas, though, has stop-and-go power that would make Italian engineers drool. He’s defied physics all season long, pulling up from his dribble with regularity, particularly behind the arc, where he takes the fourth-most pull-up attempts in the league, on average.

But the pull-up jumper isn’t just a supplementary area of Thomas’ game in which he happens to outpace most of his peers. This season he has patented the stop and pop. Of his 16.1 field goal attempts per game, seven are pull-up jumpers, indicating that the move isn’t a gimmick, but in fact an integral part of Thomas’ repertoire.

Flip to a Sacramento Kings game and it won’t take more than a few minutes to see: Thomas streaking down the floor, sizing up the back-peddling defenders in front of him and glancing over his shoulder for potential last-second threats before picking up his dribble and launching the basketball from his hands. Blink, however, and you might miss the snap of a motion. It’s jarring to viewers and opponents alike and can drastically swing momentum before opposing teams know what hit them.

At Thomas’ size, he needs every advantage he can get. Every inch of space he can create makes up for each inch of height he gives up in a sport where it comes at a premium. Having the ability to shoot the ball so quickly gives Thomas the comfort of shooting the ball with more space. It allows him to shoot on his terms, not the defender’s. With his opponent reacting rather than dictating, Thomas is afforded a rare but significant spatial advantage.

For this reason, when Thomas catches a defense napping or on its heels, he pounces.

“With me, on the transition three, I can tell when I’m going to shoot one because of how the defense is playing me early. If they’re backing up, I’m going to most likely pull the transition three,” he said. “I think me staying in attack mode all the time and being able to finish around the rim, it gives me an advantage to stop and pop and have space and opportunity to shoot that jump shot.”

Thomas’ agility and aggression combine to create a winless proposition for his opponents. If his offensive game was charted, it would look circular, with two arrows pointing toward one another.

Defenses often give Thomas space because he’s so fast. After he pulls up a few times as defenders watch helplessly out of reach, they’re likely to cut any slack they’ve given him in transition or pick-and-rolls, at which point Thomas zips by them on his way to the basket. Cover up one option and he’ll find the other. Pretty soon, you’ll look like Bill Murray chasing the gopher in “Caddyshack.”

His agility—the ability to stop and pop—opens up lanes to the basket and vice versa, with his unmatched speed fueling the whole cycle.

“Just keeping the defense on their toes. If you make a couple, then they’re going to push up and then that gives you an opportunity to get to the rim,” Thomas said. “So you just got to have a basketball IQ and know what the defense is giving you. When you know you can shoot, that opens up a lot of other opportunities, not just for yourself, but for your teammates.”

However, having the ability to take the shot and the knowledge of when to do so are two different things entirely. Thomas has danced with that fragile balance all season long.

At times he can get carried away, pulling up from the perimeter on the fast break, seemingly in an attempt to cut a large gap with a single shot. Sometimes it works, getting the crowd into the game, onto its feet, and giving teammates a shot of adrenaline. Other times, though, when it clanks off the rim early in the shot clock, it can be a rally killer and take the wind out of the team’s sails.

Clearly the pull-up jumper is an important part of Thomas’ game, but he’s at about the middle of the pack among his peers in terms of effectiveness. Ten players take more pull-up attempts per game than Thomas; five of those shoot a higher percentage than him, five lower. Behind the arc is where he becomes a little shakier.

Thomas is fourth in the league in three-point pull-up attempts with three a game, and converts the lowest amount of anyone who takes three or more attempts per game. Granted, it’s a select group of five players, but one of them is Brandon Jennings, who isn’t known exactly for his decision making or efficiency, one is Russell Westbrook, who has only played 32 games, and the other two, Damian Lillard and Stephen Curry, are far more efficient than Thomas.

So, how effective of a shot is it for Thomas, really? Ultimately, it hinges on his decision making and timing, knowing when to take it and when to restrain himself, which Michael Malone has discussed with Thomas.

“I don’t want to put handcuffs on him because I think he’s a creative player, he’s an attack player as well, but the one thing we’ve spoken about is time, score, situation, knowing that, OK, you’re the point guard. It’s not just scoring for Isaiah,” Malone said. “He’s shooting the ball at a very high percentage and that’s encouraging, but if it’s a situation where we’re struggling to score or we need to get the ball moving side to side, that’s not a good shot.”

“But if he’s in a rhythm, he’s flowing, he’s hit a couple of shots and he’s uncontested, I’m not going to take him off of that shot. It’s all going to be predicated on the time, score, and situation of the game.”

The prolificacy with which Thomas takes the shot suggests he has a level of comfort with it, which he said was the case, but his statistical deficiencies show he hasn’t mastered it, all of which proves one thing: the pull-up jumper is difficult.

Numbers and quotes aren’t necessary to grasp that, though. Anybody can respect the hand-eye coordination it takes to go from dribbling a basketball to shooting it in quick succession. In the heat of the game, with defenders surrounding Thomas and his speed working against him, precise mechanics become even more crucial than they already are in the NBA.

It’s something Thomas has been focusing on since last summer, he said, and he continues to work on making the process instinctual. He said he’s particularly conscious of his follow through, as a consistent one makes any shot more reliable, regardless of the buildup. It’s not unusual to see Thomas stay behind after practice, working with a coach on his jumper and taking a number of pull-up shots.

“(Malone) sees me working on it, so it’s not just something I’m pulling out of my bag and trying in the games,” he said. “There are opportunities in the game where, even in pick-and-rolls he says, ‘They’re going under you so you might have to shoot that to keep them honest.’ He’s a great coach to put me in a position to be successful and I can’t praise him enough.”

It’s that cycle of confidence that fuels Thomas’ ability and decision to take the pull-up jumper. He builds confidence himself by practicing it and his coach’s confidence affirms in Thomas a stubbornness to continue shooting it.

The process isn’t unlike his offensive game—that stop-and-go cycle that leaves defenders guessing—where sooner or later, one way or another, he’s going to get it.

With all the work and resulting confidence behind his pull-up jump shot, you can’t help but think sooner or later, one way or another, Thomas is going to get it.