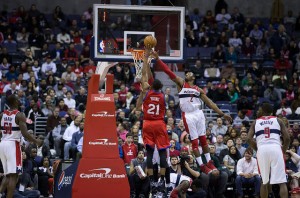 The Philadelphia 76ers have come under fire this season for unabashedly tanking, particularly at this season’s trade deadline after trading two of their best players and former lottery picks, Evan Turner and Spencer Hawes, for expiring contracts and second-round picks. The goal? To lose as many games as possible by putting together a horrendous roster simply incapable of competing.

With a starting lineup of Michael Carter-Williams, Thaddeus Young, James Anderson, and two players in Hollis Thompson and Henry Sims who didn’t even average 10 points per game in college, Philadelphia has had no problem extending their current losing streak to 16 games, dropping their record this season to 15-47. But where do the woeful Sixers stack up against the worst NBA squads of the modern era?

Note: This list is of the “least talented” teams, not necessarily the teams with the worst records. So while squads like the 1992-93 Dallas Mavericks (11-71), 2009-10 New Jersey Nets (12-70), and 2011-12 Charlotte Bobcats (7-59) were certainly terrible, they had enough talent on the roster that would go on to contribute to playoff contenders that they didn’t quite make the cut here. This is a list of trash teams and it’s important that it be restricted to garbage only. Recyclable underachievers need not apply.

Sadly, two horrible teams of yesteryear are disqualified for being horrible in the era of the NBA that overlapped with the existence of the ABA, thus making it impossible to tell just how bad these teams were without a full league of competition. So although the 1972-73 Sixers lost the most games in a season of any NBA team ever and the 1970-71 Cavaliers had the worst start of any team ever (2-34), they do not qualify for this list.

It wasn’t supposed to be like this for the 2007-08 Heat. They won a championship just two seasons previous and made the playoffs the year before (though they were swept in the first round by the Chicago Bulls). But after losing Alonzo Mourning to a season-ending injury, trading Shaquille O’Neal, and shutting down Dwyane Wade for the season, the Heat limped to the finish line with a starting lineup of Chris Quinn, Daequan Cook, Ricky Davis (Ricky Davis!), Stephen Lasme, and Mark Blount. Other members of the bench included Bobby Jones, Kasib Powell, Blake Ahearn, and Smush Parker. Miami lost as many games as they could in this debacle of a season to score the second pick of the 2008 NBA Draft. Unfortunately for them, they would draft Michael Beasley with that pick, making it a truly lost season.

Mike Woodson has a storied history of being involved with bad teams. As a player, he was the leading scorer of a Los Angeles Clippers team that only won 29 games from 1986 to 1988. As a coach, he is currently presiding over a New York Knicks season that has been nothing short of embarrassing. But his greatest achievement in ineptitude has to be leading the 2004-05 Atlanta Hawks to just 13 wins as a rookie head coach.

Although the Hawks did have rookie forward and future All-Star Josh Smith, they were also led by bricklayer extraordinaire Antoine Walker for the first half of the season. After Walker was eventually traded for a first-round pick and second-in-command Al Harrington missed almost half of the season post-All-Star break due to injury, the Hawks were left with a lineup featuring Tyronn Lue, Josh Childress, Smith, Tom Gugliotta, and Jason Collier. Gugliotta and Collier would be out of the league by the following season.

With ‘Toine, the Hawks started the season an atrocious 10-37; they somehow went an even-worse 3-32 the rest of the way, a stat that surely helped Walker in his next contract negotiation.

The Nuggets entered the ‘97 season with Bryant Stith as the only remaining starter from a horrible team, and even he would miss over 50 games due to injury.

Essentially forced to bring in a brand new starting five, Denver would place 13 different players in the starting lineup over the course of the season, eventually settling on a lineup of Anthony Goldwire, Cory Alexander, LaPhonso Ellis, Danny Fortson, and Dean Garrett to finish the year.

Although the 76ers are horrifically bad this season, they do still have Carter-Williams, who has proven himself to be a solid all-around point guard, and Thaddeus Young, who has been good for 12-14 points and 5-7 rebounds per game on playoff teams and non-contenders his whole career. Plus, they do technically have Nerlens Noel on the roster, and he is anticipated to be a strong player once he finally returns from injury.

No, the least talented team in the modern era of the NBA is …

Although the current Sixers make a compelling case, nothing beats a Goldwire-Alexander backcourt. Thankfully for Philly fans, they do have a potential All Star in Carter-Williams on the roster, not to mention Noel collecting DNPs, which is more than anyone could have said about the Nuggets back in 1997. As a result, although the current season is extremely bleak for Philadelphia, they can take solace in knowing that they aren’t the most talentless team in NBA history.