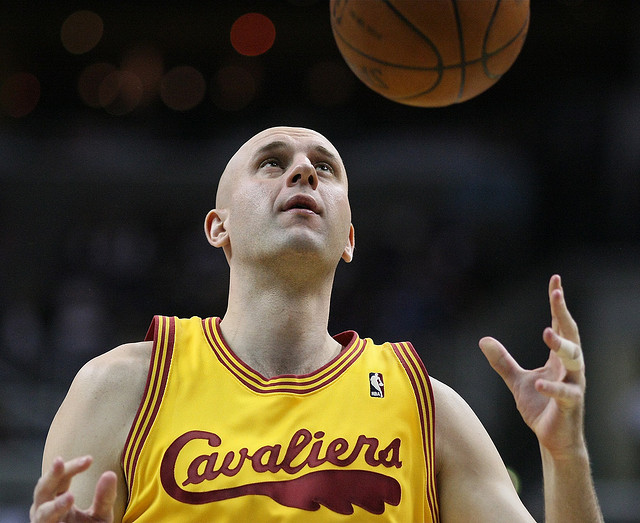 On Saturday night Zydrunas Ilgauskas became just the seventh player in Cleveland Cavaliers history to have his number retired. A two-time All-Star, “Z” was one of the NBA’s most complete centers for much of his career despite minimal attention from the national media. The Lithuanian big man has long been a fan favorite in Cleveland.

Drafted 20th overall in 1996, Ilgauskas spent 12 seasons with the Cavaliers and his final season with the Miami Heat before retiring. Less than six months after announcing his retirement, Ilgauskas rejoined the Cavaliers as a special assistant.

Ilgauskas struggled through major foot injuries in the early part of his career. At one point the 7-foot-3 center missed all but five games in a two-year span. Thanks in large part to a tremendous work ethic and dedication to the game, Z bounced back to become one of the greatest players in team history.

Along with his two All-Star appearances, Ilgauskas holds a number of Cavaliers franchise records. Z is the all-time franchise leader in games played (771), offensive rebounds (2,336), total rebounds (5,904), and blocks (1,269). His
10,616 points rank second behind only LeBron James in franchise history.

In his 12 seasons with the Cavs, the team made six postseason appearances, including a trip to the NBA Finals in 2007. For his career, Z averaged 13 points, 7.3 rebounds and 1.6 blocks per game.

Not only a fan favorite, Ilguaskas was highly respected by his former teammates. Among those on hand to watch his No. 11 get raised to the rafters were LeBron James, Daniel “Boobie” Gibson, Delonte West, and former general manager Chris Grant.

When asked his thoughts on his teammate of eight seasons, LeBron James replied: “Probably one of the most talented guys I ever played with.”