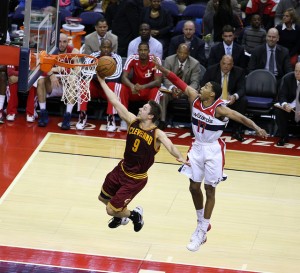 As the Cleveland Cavaliers stumble into the final quarter of the season, the question of “Where did it all go wrong?” remains. Common answers include the failed free-agent acquisitions (Andrew Bynum, Jarrett Jack, Earl Clark), re-hiring Mike Brown, a lack of chemistry between Kyrie Irving and Dion Waiters, Luol Deng’s struggles, Anthony Bennett’s poor performance. Just to name a few.

Though all of the above have contributed to a disappointing and often uninspiring brand of basketball, another offseason turn of events has proven to be equally as damaging. That event would be none other than last June’s NBA Draft. Specifically, the two picks the Cavaliers used after selecting Anthony Bennett first overall.

Bennett has already been mentioned as one of the all-time biggest draft busts in NBA history. With averages of four points and three rebounds a game he’s done little to shed the bust label. But Bennett’s struggles have been well documented. The underwhelming performance of a pair of Cavs rookies drafted after Bennett is generally ignored.

Those rookies, Sergey Karasev and Carrick Felix, have made Bennett’s numbers look like those of an All Star. Though neither player was expected to compete for the NBA’s Rookie of the Year award, both were expected to contribute. In Karasev, a number of analysts projected the 19th overall pick to earn starter minutes while rotating between the 2 and 3. That has not been the case. The Russian rookie has played in just 20 games with one start. Karasev has spent a large portion of the season with the Cavaliers D-League affiliate, the Canton Charge. Lauded for his shooting ability, length and basketball IQ, the 6’7″ Karasev is averaging less than one basket a game and has converted just 4 of 18 three-point attempts in the NBA.

Shooting Guard Carrick Felix had less expectations placed upon him prior to the season but was still seen as a rotation player who could contribute right away on the defensive end. Instead, Felix opened the season on the injured list with a sports hernia and has spent most of his season in street clothes. Along with the sports hernia, the Arizona State product has also battled a stress fracture and spent time in the D-League. Felix has been on the court for just under 25 total minutes this season, registering nine points to go along with three turnovers.

Oddly enough, the most productive Cavaliers rookie was not even drafted. Matthew Dellavedova was a four-year player at St. Mary’s who impressed the Cavs enough in Summer League to earn an invite to training camp. The undrafted Dellavedova quickly earned coach Mike Brown’s respect and made the roster out of training camp. A scrappy 2-guard from Australia, “Delly” has played in (54) and started (4) more games than any other Cavaliers rookie. In 15 minutes a game, Delly has produced 3.8 points and 3.3 rebounds per game. Despite the pedestrian numbers, Dellavedova has been an above-average defender who has quickly earned a reputation as having a motor that never stops.

Cleveland’s trifecta of rocky rookies has the Cavs looking ahead to another early draft pick come June. On the shores of Lake Erie, they hope history doesn’t repeat itself.