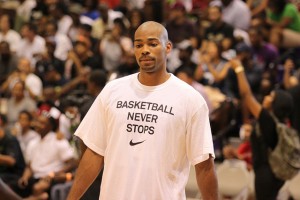 Neither the Charlotte Bobcats nor shooting guard Gary Neal discussed specifics on why he was held out of Wednesday’s 98-85 victory against the Washington Wizards.

But it was behavioral, rather than medical, and Neal said he made amends.

“I made a mistake,” Neal told the Observer post-game. ‘Me and coach talked about it and we’ll move forward from there,”

Coach Steve Clifford called this an “internal team matter.” He said it was over after the game and Neal’s minutes won’t be affected when the Bobcats play the Minnesota Timberwolves at home Friday.

Neal, who watched the game in uniform, interacting throughout with teammates, sounded contrite. Charlotte Observer

The Bobcats are keeping this in house, as they should. I actually be would satisfied if, for once, we don’t find out what happened.

Gary Neal signed with the Milwaukee Bucks last offseason after three years with the San Antonio Spurs. He was traded to the Bobcats before the deadline and is averaging 10.1 PPG, 1.7 RPG, and 1.6 APG this season. – AL