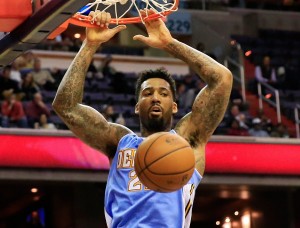 Image courtesy of  WilsonChandler.com.
Wilson Chandler scored 20 points with 10 rebounds to lead he Denver Nuggets to victory over the Orlando Magic.

Coming off a brief two-game road trip, the Orlando Magic returned home to host the Denver Nuggets. The meeting, the second between the two, went much like the first meeting, one in which the Nuggets cruised to victory. Wednesday night, after falling behind early, Denver clawed their way back into it to get yet another win over the Magic, 120-112.The start of the game was a frantic one, with both teams pushing the pace and scoring every chance they got. The two out-of-conference foes traded buckets for much of the quarter, with Orlando pulling away some late. When the quarter was over, Orlando held a 27-23 lead, thanks in large part to Nikola Vucevic’s 12 early points.

Going into the second quarter, Orlando had some momentum and used that to push the lead to 13. However, Denver remained resilient, clawing their way back into it thanks to double-digit first half scoring efforts from Kenneth Faried, Wilson Chandler, and Ty Lawson. At halftime, Denver grabbed their first lead of the game, leading 52-50 going into the break.

Coming out of the halftime break, the Nuggets continued their stout play. Denver, yet again behind Faried, got up and down, scoring bucket after bucket, leaving the Magic in the dust. A 14-2 edge in points in the paint in the quarter allowed the visiting Nuggets to carry their biggest lead, 11, into the final quarter of action, leading 85-74.

In the fourth quarter, Denver continued to control the game, pushing their lead up to a game-high 15 points. However, Orlando wouldn’t go away quietly, as Jameer Nelson tried his hardest to bring the team back, helping cut it to five points twice in the last three minutes of action. In the end, the Nuggets proved to be just too much, holding on to win 120-112.

When the final buzzer rang, five Nuggets found themselves in double figures, led by Faried’s game-high 26 points and nine rebounds. Fellow starting forward Wilson Chandler poured in 21 points, while starting point guard Ty Lawson continued his high level of play, finishing with 17 points and 12 assists. The Denver bench was led by J.J. Hickson, who came in and gave the Nuggets 24 good minutes of action, tallying 20 points and nine rebounds. Fellow big man Darrell Arthur knocked down both of his attempts from deep en route to 14 points.

Compared to their counterparts, the Magic brought forth a more balanced scoring effort with six guys finishing in double figures, led by Arron Afflalo’s team-high 24. Afflalo, who has been banged up of late, scored 18 of his 24 in the second half. Vucevic notched his eighth straight double-double, finishing with 20 points and 16 rebounds. Guard Jameer Nelson scored his most points in almost two months, finishing with 19 and nine assists. Victor Oladipo, playing in his second game after an ankle injury, scored 15 points off the bench, while Tobias Harris contributed 11 in a reserve role. Finally, big man Kyle O’Quinn scored 10 points and gabbed eight rebounds in his third straight start.

Orlando, after starting the season strong defensively, has had its fair share of struggles. Wednesday night was no exception. Denver pounded the ball inside, giving the Magic’s interior defense problems all night, as they seemingly were able to score with ease every time. It’s been an issue for much of the season, and their continued inability to stop penetration from opposing guards shined bright on Wednesday night. Orlando will have another test on Friday night when John Wall and the Washington Wizards are in town, so it’ll be interesting to see if they make any changes to try to limit their interior chances.

For the second time in as many games, the Magic let a double-digit lead fall to the wayside. Orlando was cruising, leading by 13, then something happened. Denver found their second wind and made a push to grab the lead. Head coach Jacque Vaughn said, “I can’t say that they did anything better … I think they pretty much had the same game plan throughout.” Orlando’s effort just fell short and Denver’s ability to continue to make shots ended up with the Magic blowing another big lead. It’s troubling, but it could be a good learning experience for the young Magic.

Jacque Vaughn on giving up 54 points in the paint:

Denver out-rebounded the Magic 52-38. This marks the 31st time all season the Magic have been out rebounded … They’re 0-31 in those contests.