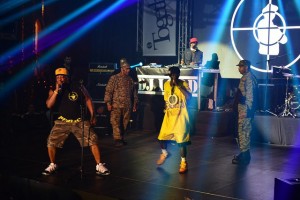 “Simple and plain
give me the lane;
I’ll throw it down
your throat like Barkley”

“Rebel Without a Pause” circa 1987 by the mega rap group Public Enemy was an immediate street anthem. The winding horn looped over a driving drum beat is hypnotizing, to say the least. PE frontman Chuck D, a.k.a. The Hard Rhymer, aggressively attacks the song, only pausing briefly to allow hype-man Flavor Flav and DJ Terminator X do what they do between the verses. The relentless flow of the lyrics fused with the emphatic delivery gave the listener an oracle of Charles Barkley dunking the basketball.

Black Steel in the Hour of Chaos

Barkley was synonymous with physicality, and of course dunking with power. The only thing soft in his game was the follow through on his foul shot. His blue-collar approach to basketball endeared him to the urban fan. Not to mention the pre-Jordan bald head, which was popularized in the late ’80s, especially in the Northeast. Barkley’s game was perfectly suited to be played on a fenced asphalt court. He brought that raw energy of street ball to the NBA. Barkley was once described by long-time 76ers scout Jack McMahon before the 1984 NBA Draft as a ball-handling Wes Unseld. Charles was an exceptional rebounder, dominate low-post scorer, and a tremendous ball handler, but it was his ability to dunk that made him special. It was a common sight for Spectrum spectators to see Sir Charles grab a defensive rebound, dribble the length of the floor around the opposition, and finish with a ferocious two-handed dunk. Chuck didn’t want next, he did whatever it took to stay on the court.

Welcome to the Terrordome

Sir Charles was explosive and powerful and did things on the court that a player of his size has never done before or since. Standing only 6’4” and weighing in excess of 260 pounds while possessing a 37-inch vertical, his explosiveness gave him the ability to ascend over his defenders. This unique skill set created an aura of physical supremacy. Charles quickly established the reputation of dunking on any player in the league regardless of size. The dunk is the most exhilarating play in basketball, and machismo personified. It goes without saying that no professional player wants to be a victim of the horrific act of being posterized or simply dunked on, and would do almost anything to not let it happen. However, Charles did it anyway, and has left a trail of carnage from players he’s victimized via the dunk.

It’s fitting that Chuck D paid homage to Barkley and gave a shout out on wax. Chuck D, who followed the New York Nets, has a historical perspective on both the NBA and ABA . He knows the significance of Barkley’s influence. Nike had it right years ago when pairing The Hard Rhymer with Barkley for a sneaker commercial spot. Chuck D has the perfect voice for Barkley’s basketball theme music. In fact if Chuck D were transformed into a basketball player he would be Charles Barkley, because they know, “all the jealous punks can’t stop the dunk.”