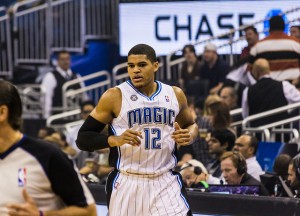 Image courtesy of RMTip21/Flickr.
Tobias Harris lead the Orlando Magic charge with 21 points, 5 rebounds, 2 assists and a steal against the Washington Wizards

After two losses where they saw double digit leads crumble down the stretch, the Orlando Magic returned to the floor against the Washington Wizards on Friday night. What ensued was an overtime thriller, in which the teams went back and forth for much of the second half of the contest before the Wizards pulled out a 105-101 victory. The win was the Wizards first in their last seven visits to Orlando, and third against the Magic this season.

Both teams fought hard, with Washington jumping out early to a big 15 point lead. However, Orlando found it’s groove, fighting, clawing, scratching their way back into it and grabbing a lead just a few minutes into the second period of action. Orlando, who struggled to get anything going offensively, looked to a balance scoring effort to keep them in the game in the first half, with all nine players seeing minutes scoring in the opening half. Washington on the other hand was carried by Bradley Beal, Trevor Ariza and Marcin Gortat who combined 32 of their 44 first half points.

Coming into the second half, Orlando got going quick, grabbing the lead and pushing it to a team high nine before Washington fought their way back into it. Orlando did have a scare in the third quarter when center Nikola Vucevic laid on the ground holding his left ankle, one which he had sprained twice earlier in the season. After the game, Vucevic told reporters he was fine and that Wizards point guard John Wall just ran into his leg, causing his ankle to turn over. He was able to return to the game, but was unable to notch his ninth straight double-double, finishing with eight points and 12 rebounds.

It didn’t take long after the Magic grew their lead for the Wizards to storm back, as they grabbed the lead going into the final quarter, up 67-66.

Stud rookie Victor Oladipo, who had been quiet in the first three quarters, came out firing early in the fourth. The Indiana product scored the teams first seven points of the quarter, helping his Magic team hang close with the electrifying Wizards. As the quarter wound down, the hosting Magic looked to be in a good spot, leading by six with just under two minutes to go.

Then, the All-Star John Wall took over, scoring his teams final eight points to tie the game up at 87 with just over 10 seconds remaining. The stag was set, the Magic had the final shot, a chance for renewed glory and a chance to take one home. Oladipo gets the ball, goes one-on-one with the lanky Ariza, takes the jumper… Clank, off the rim and the two division foes are headed into overtime.

Much like the start of the fourth quarter, Oladipo got off to a quick start in overtime, scoring the Magic’s first four points, giving the Magic breathing room once more. However, Washington, much like regulation, answered. Then, the two traded the lead back-and-forth. Orlando leading by one, Washington leading by one. Rinse and repeat.

What happened next turned the game around. Magic point guard Jameer Nelson gets a steal, he looks to have an easy layup and then, SWAT! Beal chases down the veteran Nelson, gets the ball, passes it down court to his teammates to find Ariza open in the corner for a three. The shot goes up… Swish. A gut wrenching sequence for the Magic that all that turned the game the other way, a five point swing, a chance for the Magic to go up three. Instead? They find themselves down two.

Unfortunately for the Magic, they were unable to get a bucket as close attempts from Oladipo and Vucevic roll off the rim. Then, Wall hits the back-breaker, a mid-range jumper to give Washington a four point lead, one they would not let go of. When the buzzer rang, Orlando had lost once again in heartbreaking fashion.

Washington relied heavily on their starters, who combined for 92 of their 105 points. They were led by Ariza and Wall who scored 21 apiece, with Ariza adding 11 rebounds and Wall 11 assists. Beal, who left late with a sprained ankle, wasn’t far behind, tallying 20 points. Gortat, returning to his old stomping grounds, finished with a big double-double, scoring 19 points and grabbing 14 rebounds. Finally Trevor Booker scored 11 points and grabbed 11 rebounds, as he started in place of the injured Nene.

The hosting Magic were different than their counter parts, getting nearly equal contributions from their bench and their starters. Tobias Harris, coming off the bench for the fourth straight game, scored a team high 21 points, while Oladipo finished with 15 to help lead the bench to 50 points on the night. Starting guards Nelson and Arron Afflalo also nothced double figures, finishing with 13 and 18 respectively. While his impact wasn’t necessarily felt in the scoring column, big man Kyle O’Quinn was a defensive presence in the paint, forcing tough shots and walking away with four blocks to go with six points and six rebounds. The Magic were once again out rebounded, pushing their record to a league worst 0-32 when they fail to win the rebounding battle.

After the game, when asked about the block by Beal, head coach Jacque Vaughn said it best, telling reporters, “Just give them credit both ways for Ariza making the shot… and staying in the play. Give credit to Beal for chasing it down, good stop by us and steal (by Jameer) to get an opportunity for us to get a bucket but you give him credit for tracking it down and making a block.” Oladipo shared the sentiment, saying “That was tough. I credit Beal for making a big play but we played well.”