Four years ago, this debate would’ve been ridiculous and unheard of. Four years ago, LeBron James wasn’t even close to Michael Jordan status. James was only a part of one NBA Finals, in which he was swept by the San Antonio Spurs. In Jordan’s career, he was six for six in the Finals, including six Finals MVPs for the Chicago Bulls.

Since then, LeBron has been spectacular. He has been to three straight Finals with the Miami Heat, including two championship titles and two Finals MVPs. He has also racked up two regular season MVPs during that stretch. He has emerged as a clear vote for one of the best players to ever step foot on the court. These past four years have really amped the debate over who is the best, but it has come down to either LeBron or Jordan.

In order to debate who the greatest basketball player is, you can’t exclusively look at how many championship rings they have. Anybody can lead their team to a championship if they are joined with several future Hall of Famers. Look at Bill Russell, who has more championship rings than he has fingers. With the Boston Celtics, he won 11 titles. Although he has the most championship rings of any former or current NBA player, we wouldn’t say he’s the best player ever because of who he got to play with. (Not to say he’s not good, because he is one of the greats.)

LeBron wins this category, showing that he has meant more to his teammates than Michael Jordan did to his. He did more with less compared to Jordan when they didn’t have a clear cut second option on the team. 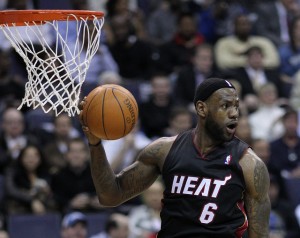 Head-to-head, Michael Jordan did more in his first 820 games. He won six out of the eight categories and tied in the other two. He doubled the amount of rings and Finals MVPs LeBron has and horribly defeats him in number of scoring records. Michael Jordan is the clear winner of this category and you can see why.

Now, let’s take a look at each player’s individual statistics through their first 820 games. First up is player efficiency rating. Michael Jordan had a higher rating, 31.1, than LeBron James, 27.8. That is quite a big jump. Next, let’s look at true shooting percentage. LeBron falls short once again, shooting 58 percent compared to Jordan’s 62.7 percent. Now, let’s take a look at total win shares, which we took a quick look at earlier. LeBron has a total of 164.7 win shares for his teams, while Jordan had 203 win shares, defeating LeBron once again.

Overall, Jordan defeated James in seven of the 12 categories and tied in one, leaving LeBron with four victories. Although Jordan scored more, James made that up in assists, rebounds, and total points accounted for as well as his defensive effort.

Yes, it’s true that Jordan has been on a number of better teams than LeBron. In addition, Michael Jordan beat LeBron in 15 of the 20 individual categories. Through their first 820 games as a professional, I would give the edge to Jordan, but it’s impossible to say who is better over their career because LeBron hasn’t finished yet. Jordan wears the crown at the moment, but that doesn’t mean LeBron can’t take it from him. He still has a lot of years left and can easily surpass Michael Jordan.