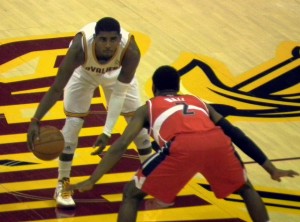 The Cavaliers might have dodged a bullet when they learned Tuesday that Kyrie Irving suffered a strained left biceps tendon – not a tear, as originally feared.

The injury will force Irving to miss at least two weeks, at which time he will be re-evaluated to determine the next course of action.

By then, the Cavaliers’ playoff fate should be determined. About 4 ½ weeks remain in the regular season, and the Cavaliers still are 4 ½ games behind the final playoff spot in the Eastern Conference with 15 games left. They host the Miami Heat on Tuesday.

Irving suffered the injury in the first quarter of Sunday’s game against the Los Angeles Clippers in a collision with Blake Griffin. He returned to Cleveland with the team following the game, and an MRI and examination by the Cleveland Clinic’s Richard Parker revealed a strain in the long head tendon of his left biceps. The Plain Dealer

Kyrie Irving is officially injury-prone. It’s not just one kind of injury. Irving has suffered moderate to serious injuries to his hand, head, knees, feet and shoulders since his college career. He’s abnormally brittle like Glass Joe from Nintendo’s Punchout.

Among the 17 other reasons LeBron James is not coming back to the Cavaliers, this issue ranks number one. – AL