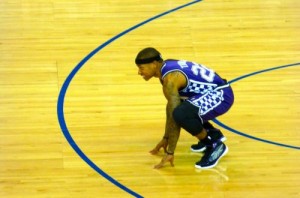 Beholden by his ball handling, awe-struck at his impeccable scoring ability and supportive of the intensity that is Isaiah Thomas, Sacramento Kings fans adore the 5″9′ explosion of energy. The City of Sacramento holds him in the highest regard on and off the court. They trust him with the ball, they want him taking game-defying shots and they believe in the unlikely success Thomas has experienced in his NBA career. There has not been a moment all year which has lacked the full and unmitigated support of Sacramento, or even the belief that he doesn’t deserve a role as large as he currently utilizes.

For Thomas, this is a divine reality. For the Sacramento Kings, it might be a major fallback.

I am a firm believer that Thomas has the ball in his hands far too much for the offensive well-being of his team. This isn’t to go against the fact that he is an effective ball handler and even an impressive shooter, but the constantly overlooked flaws which he brings to the Kings’ offense raise questions like this: would the Kings be better off if Thomas didn’t have the ball so much?

Thomas is a purely offensive point guard. He isn’t going to pose any malicious perimeter defensive threat like a Patrick Beverley, Russell Westbrook or Thabo Sefolosha. He is all offense because that is his role on this team. It’s obvious that a defender as undersized as he is isn’t going to be a big hassle to the modern NBA point guard, especially in this current stage of the position where it seems that every team has an elite man running the offense. Defensive prowess is not his role. He knows it and we know it.

His role is largely offensive as that is what his game is tailor-made for. We all know the signature pull-up jumper from both mid- and long-range, or the high-arching floater over the outstretched hands of big men hoping to block a shot. He is a good offensive player as his numbers relate; he averages just over 20 points per game and does so easily.

The problem with Thomas’ game is that he is accompanied by two scorers in Rudy Gay and DeMarcus Cousins. Not only are Gay and Cousins good offensive players, but both are leaps and bounds more effective and more efficient than Thomas. Thomas takes away their number of touches and his passing comes in small increments. He isn’t a point guard who will feed his big man over and over to make sure he gets his game going. He drives in looking for his own shot rather than looking for open teammates, and it takes away from the Kings’ offense as Gay and Cousins are the most important scorers on the team.

To limit players like Gay and Cousins seems like an elementary mistake. While Thomas brings impressive offensive numbers for any NBA player, he does so with far too many touches of the basketball. Thomas averages 85 touches per game, and has touched the ball eighth-most amongst point guards, behind John Wall, Kemba Walker, Kyle Lowry and Damian Lillard, Michael Carter-Williams, Chris Paul and Mike Conley.

It seems to make sense – a point guard should have the ball in his hands as much as possible to facilitate and create productive offensive possessions for his teammates. However, Thomas doesn’t seem to provide the right offensive game to fit within an team which should be fully focused on feeding Cousins the basketball to his heart’s content. As one of the most feared big men in the game, Cousins needs to have the ball in his hands more than he currently does. Especially when paired alongside a consistent shooter and cutter in Gay, Thomas needs to be able to get the ball into his teammates’ hands for easier shots. He looks for his jump shot far too much, and the fact that he averages only 6.4 assists per game while paired with two of the league’s great scorers makes it clear that something is wrong.

This isn’t to say that Thomas is a poor point guard. He is a very good one, but that doesn’t necessarily mean the Kings can’t evaluate their options and possibly look to a more true point guard. Thomas slows this team down offensively, holding the ball and not actually starting offensive possessions until late in the shot clock. The Kings need a guard who feeds Cousins and Gay every single time down the floor, moving the ball to his teammates who are more than capable of scoring. It’s easy to look at Thomas’ point per game production and consider him a perfect fit in this team’s system, but he isn’t.

The Kings needs a pure facilitator, even if it means giving up five or six of Thomas’ points for a couple more assists. Getting Gay and Cousins into their rhythm offensively is the most important thing when this team has the ball. Thomas is a good scorer and a good player, but he isn’t the point guard the Kings need. If there is a possibility for a pass-first point guard, the team should look into it.

If Thomas were a more true point guard, the possibilities for Cousins could be endless. As one of the best centers in the league, he needs as many touches as a Joakim Noah (78.7 per game) to reach his full offensive potential. If Thomas can become a more effective passer of the ball, great. If not, it may be time for the Kings to move for a more pure point guard who helps his teammates before he helps himself.