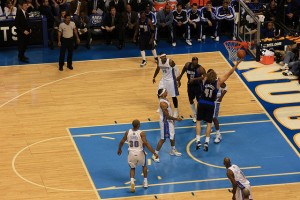 While everyone else was mourning over their shattered NCAA brackets (which by now surely looks a little like Kevin Ware’s leg circa 2013), the Dallas Mavericks’ Monta Ellis decided to put on a show against the visiting Denver Nuggets Friday night. Ellis put 26 points on the board during Dallas’ 122-106 win over Denver, while teammate Dirk Nowitzki added his own 21. Based on the careful way the Mavericks (42-28) handled the ball, it was clear they refused to make the same mistakes they made during the overtime loss to the Minnesota Timberwolves two nights earlier.

The game wasn’t without its fan-gasping moments however, especially when Dallas’ Vince Carter (13 points) dislocated his right pinky during the first quarter while Denver’s J.J. Hickson (18 points) went down in the fourth with a sprained right knee acquired during a desperate attempt to catch up to the home team. Ultimately, Carter decided to rub some dirt on it and helped out his team by making some huge plays down the stretch while Hickson managed to hobble to the locker room.

Denver had been a pebble in the shoe of Dallas this season, having stolen a win from the team during their three-game losing streak two weeks prior to Friday’s game. Though this time they were able to build a lead the Nuggets couldn’t quite overtake, especially when the Mavs headed into the locker room at the half leading 61-53. It wouldn’t be a watchable game though (especially for Nuggets fans) if Denver hadn’t given Dallas a run for their money in the fourth when Darrell Arthur cut the lead down to three points (99-96) with 6:25 remaining on the clock. It was Nowitzki, Brandan Wright, and Shawn Marion, who answered by pushing the lead 109-99 in only two minutes. Marion finished the game with 14 while Wright added 13 points off the bench.

The Mavs are out to prove that they belong in the postseason by making baskets off defensive mistakes, and it helps that the Memphis Grizzlies (who are looking to push past Dallas in the Western Conference for the coveted seventh seed) were taken down by the Miami Heat, who managed to rally in the last three minutes of their game to beat the Grizzlies 91-86.

The Mavericks look to keep their playoff hopes alive when they face the Brooklyn Nets Sunday night while Denver moves to take on the Washington Wizards.