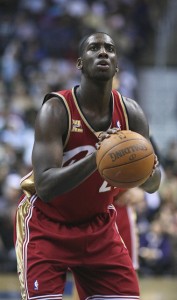 The news came Saturday that the Nuggets have lost their fourth player for the rest of the season because of an injury when J.J. Hickson’s MRI revealed a torn anterior cruciate ligament in his right knee.

The rest of the season is just 13 games, but he joins Danilo Gallinari, JaVale McGee and Nate Robinson, who all underwent season-ending surgeries.

Hickson is the third Nuggets player to go down because of an injured ACL.

Hickson is the Nuggets’ leading rebounder at 9.2 per game, and is the fifth-leading scorer at 11.8 points per game.

“He’s had a good season for us,” Nuggets coach Brian Shaw said. “J.J. has shown that when he was a starter, and lately as he’s come off the bench, regardless of whether he plays a ton of minutes or he plays lesser minutes, he’s still always around that double-double mark. He’s an elite rebounder for the minutes that he plays.” Denver Post

What’s the lesson here? Don’t walk or run in Denver or Portland. What is it up with those two cities and ACL injuries? – AL