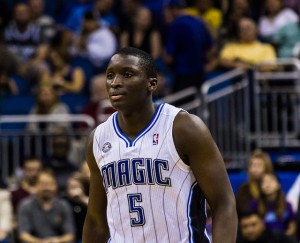 Image courtesy of RMTip21/Flickr.  Victor Oladipo lead the Orlando Magic with 19 points in tough loss to the Utah Jazz.

The Orlando Magic started the first night of a back-to-back road trip facing the Utah Jazz. The game featured two of the NBA’s top three rookies in Victor Oladipo and Trey Burke. Both have been playing well since the All-Star break and were ready for a head-to-head showdown. With the absence of Jameer Nelson, Oladipo got the starting nod at the point opposite the rookie out of Michigan. Forward Tobias Harris has had a great month of March, being used in a sixth man role off the bench for the last six games. Both teams were looking to end losing streaks, the Jazz on a six-game skid and the Magic a seven-gamer. On top of that, the Magic were looking for just their fifth road win of the season, the last one coming on February 26th against the Philadelphia 76ers.

The game tipped off and immediately Oladipo was called on a foul sending Gordon Hayward to the line. On the ensuing possession the Magic committed a turnover, but eventually Orlando got a hold on the game. Oladipo was aggressive with the ball in his hands and created some open shots for his teammates, but more often than not, the shots weren’t falling. It was quite the contrary for Richard Jefferson in the early going as he connected on four triples, contributing to his 17 first quarter points.

Orlando started the second quarter in an 11-point deficit, much of which can be attributed to unforced turnovers that plagued the Magic offense that only recorded 16 points in the first quarter. By comparison, Richard Jefferson outscored Orlando by himself. But the Magic battled back in the second quarter, coming within three points. Thanks to some strong play by Nik Vucevic, Orlando was back in the game and the first half buzzer sounded with the Jazz leading 49-43.

Jefferson continued to torch the Magic with his season-high fifth three-pointer early in the third quarter. With the Magic unable to hold on to the ball, Jacque Vaughn’s patience must have been running low. The lead quickly expanded to 14 but Orlando was able to cut it to five behind the offensive efforts of Oladipo and Vucevic.

If the Magic could just begin to execute on offense they could grind out an ugly win, but early in the fourth period it was the Jazz hitting shots, opening up a 10-point lead. A trend built throughout this game where the Jazz would break open a lead, followed by Orlando fighting back into the game. Although Orlando never fully gained any sort of advantage, they maintained striking distance. Unfortunately, every time they put together a run to cut the lead to just a few points, the Jazz had an answer. It was an array of three-pointers that cut the Magic defensively, and the turnover troubles did not aid the bleeding.

That all changed in the closing minutes when Arron Afflalo hit a three to tie it at 74. The game really began to heat up at that point, and the next two possessions saw the two featured rookies trading buckets. Orlando finally achieved its first lead of the night with just three minutes remaining in the game. Burke immediately responded with a three of his own to give the Jazz a two-point lead.

The two squads continued to exchange buckets leading to a two-point Magic lead with 30 ticks left on the clock. Richard Jefferson got to line, converting one of the two free throws. Oladipo the gave his team a three-point lead with two free throws of his own with 21 seconds remaining. The Jazz kept converting quick twos and fouling and eventually Afflalo missed a free throw. Hayward ran the ball upcourt off the miss and dished it to Trey Burke, who hit a three with 1.6 seconds remaining to give his team a one-point lead.

Kyle O’Quinn’s inbound attempt was tipped out of bounds by Derrick Favors, leaving Orlando with just .4 seconds left in the game. Jacque Vaughn drew up a play, inbounding the ball to Afflalo for a catch-and-shoot, but the buzzer sounded before he could get the shot off. Jazz won with a final score of 89-88.

Trey Burke is the hero

Trey Burke proved to be the hero of this game when he drilled a corner three with just over one second remaining to give his team a one-point lead. He finished the night with 17 points and four assists.

Although they came close, the Magic could not close out the win on the road which has been a reoccurring theme this season. Orlando has just four road wins and has mightily struggled when not playing at the Amway Center. The next road game is on Sunday, March 23, against the Los Angeles Lakers.

The Magic did not gain a lead until just three minutes remaining in the game. The team’s largest lead was three points.