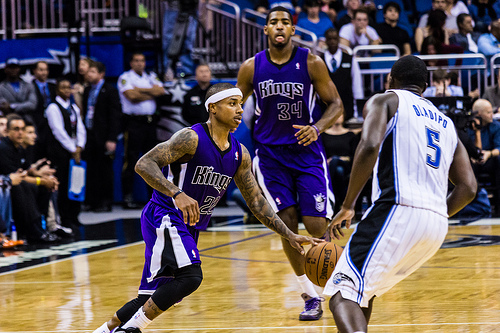 Larry Drew insists the Milwaukee Bucks haven’t become cynical due to the down year they’re having. Games like Sunday’s, though, make it hard to imagine how. Against the Sacramento Kings, as has been the case for much of the Bucks’ season, everything that could go wrong did.

The Bucks sported their red alternate uniforms, which was fitting because they looked more like matadors than defenders in their attempts to stop the Kings. Offense wasn’t much better: the Bucks worked for decent looks in the paint early on, but missed shot after shot near the rim, contributing largely to their insurmountable deficit.

It was the basketball version of Murphy’s Law.

Sacramento, of course, was the beneficiary of Milwaukee’s woes Sunday, capitalizing on the Bucks’ many deficiencies to cruise to a 124-107 win.

The Kings came out of the blocks quickly, sprinting to a 39-16 lead in the first quarter, and, for the most part, didn’t look back.

They pushed into the paint early on, which opened up opportunities farther out. Milwaukee lacks a potent offensive threat, making the defensive assignment easier on Sacramento’s explosive trio, which seemed to salivate over their opponent.

To the dismay of Michael Malone, Milwaukee did some damage control late, exploiting a lax Kings defense to narrow the huge lead. Although there were 12 minutes left to play, Sacramento players seemed content that they had secured a win with the cushion they created between them and their opponent. The Kings replicated the Bucks’ earlier matador defense in the fourth quarter, causing Malone to call a few timeouts in frustration.

Ultimately, the gap between them and the Bucks proved plenty large, but the late defensive play prompted a shift in tone following the final buzzer. Malone was critical of the team’s play to close out the game, and his players agreed that they became too complacent.

“(Malone) has a right to be upset. We didn’t play the right way in the fourth quarter and it was embarrassing,” said Isaiah Thomas, who finished with 30 points and eight assists. “It would have been better if we didn’t play good in the first (quarter) and ended well, but we just didn’t end it well, and that leaves a different taste in your mouth because you want to finish off games, whether it’s a close game or a game like tonight.”

One of the main reasons the Kings were even in a position to become complacent was the play of DeMarcus Cousins, who set the pace for Sacramento from tip-off. The Bucks have been without their defensive stalwart Larry Sanders for over a month now, and Cousins attacked the weakened Milwaukee frontcourt. Regardless of who was put in front of him (it was a rotating cast throughout the night), Cousins had his way.

In the first quarter, he knocked down a few mid-range jumpers and moved through the post mostly unimpeded, which established a foundation of confidence for the rest of his night. At one point, as the Kings were building a 40-point lead, Cousins looked like he was toying with his opponents.

Once, he took the ball from end to end, deftly dribbling through defenders before finishing with a dunk. As the game wore on, he seemed to test his range, taking a leaner and a step-back jumper. Although Cousins only played the first three quarters, 29 minutes on the whole, he amassed 32 points, 12 rebounds, and 4 assists.

“We did take advantage of (the post) … We went inside on them, and it was effective,” Cousins said. “I just got going early and stuck to what was working.”

The Kings weren’t quite able to match that game-long consistency, but they’d surely accept a similar start when the New York Knicks come to town Wednesday.