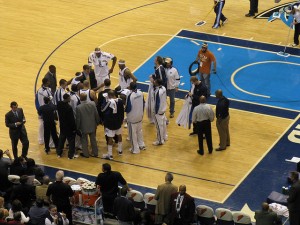 It’s hard to pinpoint exactly what woes Dallas Mavericks fans fretted about after witnessing Sunday’s 107-104 overtime loss to the Brooklyn Nets. Maybe it was their own team’s startling impressions of Stevie Wonder whenever a player took to the free-throw line? Or was it the whiplash worthy arm of Brooklyn rookie Mason Plumlee? Perhaps they cringed over watching their former beloved point guard Jason Kidd coach the visiting enemy wearing a designer suit and an intimidating expression worthy enough to scare Walter White. Whatever the reason, they weren’t too thrilled to see their Mavericks (42-29) drop from seventh in the Western Conference standings to eighth.

Aside from the hard inadvertent hit to the face of Dallas’ Jose Calderon (courtesy of Plumlee) during the very first minute of the game, the matchup appeared to lack the usual Mavericks stentorian energy, which didn’t stem from a void of completed baskets on the home team’s part. Dallas pounced early and closed the first quarter 29-15, thanks to Devin Harris, who scored nine points after taking over for the injured Calderon. Things looked to get a little uneasy for the Mavs in the second, however, as the Nets started sinking baskets with much more ease and managed to cut the deficit down to seven points at the half, Dallas leading 48-41.

Brooklyn nabbed the lead in the first few minutes of the fourth (73-72), but it became an offensive game of tug-of-war, which ended in both teams settling for a 91-91 tie headed for overtime—a seemingly quarrelsome feat for Dallas who were 0-2 in OT this season. Joe Johnson (22 points), Deron Williams, and Shaun Livingston put the Nets back on top 103-95 at the start of overtime. However, just when the American Airlines Center went almost completely radio silent, Dallas guard Monta Ellis (who finished another impressive night with 32 points) nailed two three-pointers with 5.4 seconds left on the clock, bringing the Mavs within one point. After forward Paul Pierce sunk two at the free-throw line, it was up to Ellis to hit the last three-pointer that would seal the fate of the visiting team at the buzzer. Only this happy ending wasn’t meant for the Mavericks—it was meant for Dallas’ former golden boy Kidd and his Nets. Ellis missed the long-running basket and the Mavs (now 0-3 in OT) slipped to the Nets for the third time in a row.

The Dallas Mavericks clearly struggled at the free-throw line, shooting 77.4 percent to Brooklyn’s 84.8. Free throws missed by Ellis (8-of-11) or Samuel Dalembert (4-of-6) would have benefited the Mavericks at the end of the fourth and would have given them the win needed in order to remain in the West’s seventh seed. All-Star Dirk Nowitzki wasn’t in his best form either, scoring only 10 points. The Nets’ Marcus Thornton followed behind Johnson’s 22 points with 20 of his own while Shaun Livingston had 12 points and seven rebounds. Ellis, Shawn Marion, and Vince Carter (both with 12 points) were the high scorers for the home team.

Dallas continues their long homestand on Tuesday when they face the Oklahoma City Thunder while the Nets go toe-to-toe with Anthony Davis and his New Orleans Pelicans.