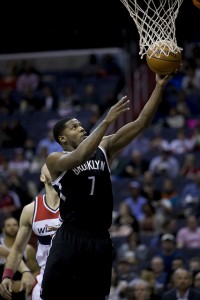 On Sunday night, the Brooklyn Nets’ Joe Johnson rumbled to the rim with 10 seconds remaining in a tangle against the Dallas Mavericks, banking home a shot that would send the game into overtime. Down two, coach Jason Kidd went with a super small lineup—with Paul Pierce playing “center”—to spread the floor for Johnson and let him take his man one-on-one. And why wouldn’t Kidd? Johnson has proven time and time again to be a cool customer in big moments, unfazed offensively and always able to get at least a decent shot.

This point in the game forced me to wonder, Why Joe Johnson? Why is a player with an unjust reputation of sometimes being apathetic on offense (which mostly stems from his contract being so unbefitting of his overall output), a player that will just as likely put up two points in a game as 37, also arguably the league’s best big-shot taker?

That line of questioning led me to the conclusion gracing this piece’s heading: Joe Johnson is Eli Manning. This is the part of the article where you make a (justified) “Well, without the championship rings” crack, so go ahead…. We good? Good. Let’s move on.

The obvious connection between the two New York-based athletes: They’re certainly not the best in their respective leagues, but their games get upped to elite levels when it matters most late in close contests.

But it extends beyond that. It extends to why they play this way. Manning and Johnson are always—always—relaxed. This is why New York Giants fans are never shocked to see Eli throw a pick on the first possession of a game, and why Nets fans are never shocked to see Johnson go 1-of-5 or 1-of-7. Sounds frustrating, but it’s not so bad: the same demeanor that makes these two disappear at times for three and a half quarters also makes them the coolest guys in battle when everyone else is feeling the pressure. Giants fans will tell you that it’s worth the trade off.

Johnson went on to hit a big three and notch six points in overtime on Sunday, and assisted Deron Williams’ trey to go up by eight en route to a 107-104 win over the Mavericks.

Johnson’s incongruous contract ends after the 2015-16 season, and it will be interesting to see what sort of deal he fetches in the open market.

He hasn’t won a ring, and he’ll never be the superstar to match his superstar contract, but he is a winner. His curse has been that his contract is prohibitive to a team’s championship aspirations; to a team’s getting into big games for Johnson to help close out.

That’s why it would be a nightmare for the rest of the league if Johnson landed with a perennial contender like the San Antonio Spurs or Miami Heat, possibly on the cheap in search of a championship. Then maybe I can make this comparison without you making that “Without the rings” joke, and Joe Johnson would be that much more like Eli Manning.