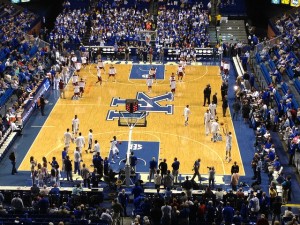 When the NCAA tournament bracket is first released, most fans turn on their laptops or desktop computers or whatever their preferred medium is for viewing online content and they examine the bracket more closely. The main purpose is to strategize for their office pool, but the other reason is to look a few rounds deep and see if there are any intriguing potential matchups. Some years this looks like a Duke vs. UNC Elite Eight matchup or maybe it’s a Michigan vs. Michigan State Sweet 16. This year, one of those exciting potential matchups was Kentucky vs. Wichita State in the Round of 32.

The intrigue of this matchup, which went from potential to certain after each team won its opening game, had nothing to do with a historical rivalry. The two teams are in different conferences and different states, but it was what they represented that made the game so compelling.

Kentucky starts five freshmen, and their coach, John Calipari, has essentially created a factory of one-and-done players. Top rated high school recruits sign on with Calipari with the intention of leaving after one year and achieving their dream of being drafted by an NBA team.

Wichita State could not be more dissimilar. It’s a school in a less prestigious conference that doesn’t recruit from the same pool as Kentucky. They start two seniors, one junior and two sophomores.

There was a clear divide between the viewers of this game. If you were rooting for Wichita State, you were likely a college basketball purist, concerned with having a healthy college basketball product above all else. If you were rooting for Kentucky, you probably only watch college basketball to scout for your favorite NBA team. At least this is how the media portrayed the build-up to the game. There was no room for nuance. The winning team would take the crown, and either one-and-dones would be the right way to build a college program or recruiting guys who planned on staying around for four years would be the way to go with nothing in-between.

Finally, Sunday rolled around and the game tipped off. It was clear from the get-go that it was going to be a close one. Both teams played terrific basketball and by the end of the game, Kentucky escaped with a win after Wichita’s Fred VanVleet missed what would have been a game-winning three-pointer. Clearly this was a game that could have been played in a much later round, and when the tournament finishes up and a champion is crowned, it’s quite possible this will be remembered as the game of the tournament.

But still, there was a winner and that winner was the Kentucky Wildcats. What does this mean? It means that the teams that recruit one-and-done players are right and all of the Wichita States of the world should get their NCAA status revoked. Okay, just kidding. What the game actually showed is that there is no right or wrong way to construct a team. Both of these teams have been, at some point in the season, legitimate title contenders.

What this game did was actually better than dictating the right way to build a team. It established a new form of rivalry in college basketball, similar to one that exists in the NBA.

Wichita State and the many other schools like them are analogous to the small-market NBA teams. They will have to continue building programs that rely on senior leadership while schools like Kentucky will continue to rely on their name and reputation to bring in top recruits.

Neither will be better than the other for it, but they will remain different. And that distinction will continue to breed rivalries between big and small schools. Rivalries are usually good for a sport and they will be for college basketball.