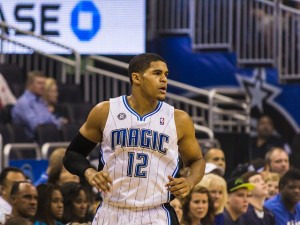 Image courtesy of RMTip21/Flickr. Tobias Harris scored 25 points to lead the Orlando Magic to victory over the Portland Trail Blazers.

As the old saying goes, “even a blind squirrel finds a nut sometimes.” On Tuesday night the Orlando Magic were the squirrel and an elusive victory was the nut. Hosting the fifth-place team in the Western Conference, the Portland Trail Blazers, Orlando took control of the game early and cruised to victory, 95-85.

From the start, electrifying rookie Victor Oladipo made his presence known with his ability to drive to the hole and find open teammates for easy buckets. Oladipo’s drives pulled the defense in and opened up easy scoring opportunities for big man Nikola Vucevic, who paced the team early with 10 points and three rebounds in the opening quarter. Vucevic continued to have success for much of the night, finishing the game with 22 points and 10 rebounds. The 22 points tied the former USC Trojan’s second-highest scoring mark of the season, which came in the second game of the year in Minnesota. His season high is 30, which he notched in the team’s fifth game, against the Los Angeles Clippers.

“I felt pretty good, got going early in the game,” Vucevic said after the game. “It was a boost to my confidence; I just want to keep being aggressive. Robin Lopez was helping a lot when our guards were driving which gave me a lot of easy points. I just wanted to be aggressive. We’ve had a rough stretch where we didn’t win a lot of games lately so I wanted to help my team and get a win.”

Coach Jacque Vaughn praised Vucevic for his strong game. “I just think overall it seemed like he felt really good on the floor. He caught the ball in great space (on the floor) and had great spacing around him so that he could react with the basketball,” Vaughn said. “Victor’s penetration early really got him going. A couple of drop off passes got Nik going early and that was impressive as the night went on.”

While Oladipo’s final stat line of 13 points, 6 assists, and 5 rebounds may not jump off the page, his impact was felt all over the court. After starting the game 3-of-6, All-Star point guard Damian Lillard was held to just 2-of-11 shooting, thanks in large part to Oladipo’s tenacious defense.

With All-Star LaMarcus Aldridge out with a back injury, Orlando was able to dominate upfront, not only with Vucevic, but also Tobias Harris, who continued his strong play off the bench. Harris has bounced between starting and coming off the bench and finished with a game-high 25 points, adding a team-high 11 rebounds. Harris looked confident with his shot, knocking down 10-of-15 from the field and 2-of-3 from behind the three-point line.

The Blazers, playing their third of five on the road, are going into tailspin. They struggled to get anything going offensively after a hot-shooting opening quarter, one in which they shot 52.2 percent from the field. They struggled to knock down three-pointers, going 7-of-26 from the floor, and were unable to consistently knock down shots all night. Their man in the middle, Robin Lopez, was one of their few bright spots, notching 20 points to go along with a game-high 13 rebounds.

Coach Terry Stotts was complimentary of Lopez’s big game, saying, “Robin kept us in the game with all of his put-backs, his rebounds. He played almost the whole second half. We’d get the ball to him on rolls, and he gets his offensive rebounds and that’s how he helps us offensively. He played a terrific game. He played his ass off tonight.”

Sharpshooting guard Wesley Matthews was able to get open and knock down 4-of-8 from beyond the arc en route to 18 points. Unfortunately for Matthews, his success from deep didn’t transfer to the rest of the floor, as he went an abysmal 5-of-13 on the night. “We have to win,” he said. “We have 10 must-wins left. We just have to win games.”

The Marquette grad, who went undrafted, added this about the Magic: “They played with more energy. They rebounded the ball. We scored 85 points. We are a team that scored in the hundreds, so regardless we have to win games. We need to keep playing basketball and play with an urgency.”

The Magic played well on both ends and were rewarded with a hard fought victory. They’re making strides, and these final 10 games are for incremental improvement, as coach Vaughn said pre-game. Tuesday night showed that they’re improving, even if it’s only at home; they’re growing as a bunch and showing the ability to continually beat teams high up in the playoff race.

Orlando will be looking to build off this big win, one that came on a night they honored another former franchise legend, Grant Hill. They’re next on the court at home against the division rival Charlotte Bobcats on Friday night.

Portland on the other hand is in desperate need of a win and for LaMarcus Aldridge to return. While there is no date set in stone for his return, Aldridge did say that his back injury has been feeling better the last couple of days, but his inability to run has hindered him in his potential return to the court. The Blazers have a day off before facing the Atlanta Hawks, in Atlanta, on Thursday night.