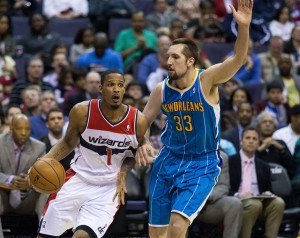 After months of speculation, the New Orleans Pelicans have finally announced that Ryan Anderson will have surgery to correct a herniated cervical disc and will miss the remainder of the season.

Anderson was injured on January 3 against the Boston Celtics when he collided with Celtics forward Gerald Wallace. Anderson hasn’t played since.

The team said in a statement that it decided surgery was needed “after consulting with a team of physicians.”

The statement also said surgery is the “best opportunity (for Anderson) to have a full recovery. Anderson will undergo surgery on April 8. The Times-Picayune

The New Orleans Pelicans are capable of being a playoff team with their current roster, but the injury bug him them in too many places. Jrue Holiday and Jason Smith were also placed on injured reserve months ago. It was too large a task for a group of new teammates to gel together despite injuries like the Brooklyn Nets or Chicago Bulls, especially in the hellish Western Conference. This is further complicated by the fact that the Pelicans lottery draft pick goes to the Philadelphia 76ers thanks to the trade that brought Jrue Holiday over in the first place. The team is still in good shape but expect that trade to be slammed by pundits over and over in the next few months. – AL