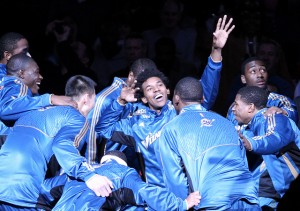 Nick Young sauntered out of the Lakers’ locker room Sunday sporting his bright smile, his energy stemmed from a rare victory, a breakout game and his positive demeanor.

But that soon evaporated once he arrived at his Sherman Oaks residence. Young discovered that his house was broken into and that about $100,000 worth of goods were stolen. That included jewelry, computers, luggage and various shoes that included his recent prized possession.

“They got me. They stole my Yeezy’s,” said Young, referring to the Red October Nike Air Yeezy’s 2 that he says is worth $6,000, an item he acquired for free because of a contract with Nike. “I wasn’t expecting that. It was tough to get in after a good win to come home to that.”

Young said he immediately knew he was robbed after seeing his window was broken and clothes were scattered all over his floor. Young then phoned his mother and police around 2 a.m. Young reported authorities did not arrive until 4 or 5 a.m. while he stayed at a nearby hotel. Los Angeles Daily News

Thank goodness no one was harmed during this crime. It’s unclear how the burglars were aware that no one was inside Young’s home, but they likely staked out his place before attempting the theft. Public figures often have to worry about this sort of issue for all sorts of reasons, but it is weird that anyone would think to go after Nick Young instead of a player with a higher salary. I guess Swaggy P really does make all the boys jealous. – AL