“Good artists borrow from other artists. Great artists steal from them outright.” – (Usually attributed to Pablo Picasso or T.S. Eliot)

I have been addicted to podcasts for a while now. One of my favorites is the B.S Report on Grantland and, more specifically, the Half-baked Ideas episodes featuring Kevin Wildes. During these discussions, the guys trade ideas back and forth that have obvious pragmatic problems but are fun to think about and toy with for a while; thus making them only “half-baked.”

The ideas are typically meant to solve problems in sports via absurdest means.

I’ve already stolen this methodology for baseball (their method, my ideas) for a segment on purplerow.com called “Purple Hazed Ideas” and thought it time to bring the fun to court and therefore to Baller Mind Frame. Thus I present the first edition of “Dope Thoughts.” 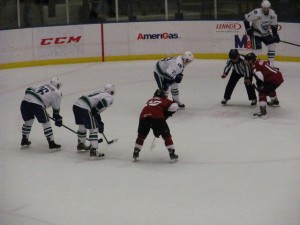 I don’t watch a lot of hockey (understatement) but when I do I find myself most engaged by a phenomenon known as the “power play.” It adds a dynamic to the sport that I thoroughly enjoy as one team packs in its defenses in preparation for an all-out assault.

I happened to flip on a hockey game just after having seen an NBA star (Carmelo Anthony) foul out and as my mind ran through all the things that are wrong with NBA officiating, the hockey game in front of me provided an amazing (if not completely absurd) solution to many of these problems.

What if the NBA had a power play?

The idea could manifest itself in many different ways but let’s start with the basics.

The concept is that some type of infraction would require one team to play a man down (4-on-5) for a period of time. Without having tested it pragmatically, the two-minute hockey time frame feels a little long, but might work just as well as one minute or even a minute and a half.

Depending on how we implement the rule, the player that must be taken off could either be the one who committed the infraction or the team could choose.

So, let’s say the goal of this rule is to avoid having marquee players foul out while still cracking down on the special treatment they often get. In this case, let’s take our Carmelo Anthony example and say that instead of him automatically having to sit after picking up his sixth foul, the team could choose to expunge one of those fouls in favor of allowing the other team a momentary power play.

Consider a scenario where Kobe Bryant is having a tremendous game in the first and second quarters. He picked up an early foul but was fine until picking up two more in quick succession midway through the second. Conventional wisdom says you sit Kobe until the start of the third.

But with the NBA power play, you could remove that third foul, keep Kobe in the game (who we all paid to come see anyway) and the Lakers are still punished but in a way that makes the game more exciting by adding a new dynamic instead of less exciting by removing the best players.

Or perhaps the goal of the new-silly-rule-that-I’ve-just-made-up is to cut down on overly violent or aggressive play. The flagrant foul (or worse, the double-flagrant) could be met with a power play instead of free throws and the ball or player ejection.

On the court, the implications could be beyond fascinating. Like in hockey, both teams would need to adapt new strategies based on the new geometry available. It would likely behoove the team that is down a man to really pack the paint, or maybe even go to zone.

On offense, the disadvantaged team would need to work the clock as much as they could, maybe intensify offensive rebounding as extra possessions can reduce the damage done while trying to defend your hoop without even numbers.

Also, both teams would need to keep an eye on yet another clock, as whomever was sent off will be rejoining the game without a pause in the action. If implemented such that whoever committed the foul was the one sent off, can you imagine LeBron James or Kobe Bryant standing at the scorer’s table, waiting for the power play clock to wind down and then leaping into the action in the middle of a play for a steal, a block, or a drive out of nowhere to the basket?

I’m not sure what the most compelling way to apply the NBA power play is. Only for flagrant fouls or when a player reaches their sixth? For technicals? Any time a coach chooses to replace any foul with the option of taking one guy off the court? One minute? Two minutes? Longer?

I remember watching a game once where it appeared David Lee (with the New York Knicks at the time) had fouled out. He walked over to the referees and clearly stated “That’s my sixth foul!!” After a short conference, the referees attributed the foul to someone else (who really wasn’t even in the area) and the game continued with Lee in it.

This kind of thing happens a lot. It happens when the tiny point guard raises his hand for reaching after his massive center (who is in foul trouble) just hammered some dude. The ref knowingly avoids a riot by still administering free throws but not dramatically changing the game by forcing an impact player to sit.

Instead of bargaining our way to that position, why not force the team and the player to make an actual tradeoff?

This could even create a whole new area of analysis and debate and discussions for taking heads.

“Who is the best power play team in the NBA?”

“Well, y’know Mike, San Antonio is actually plus-fifteen points when they are playing disadvantage this season! And conversely, the Knicks are minus-200. The best team in advantage so far is, of course, the Miami Heat, who are plus-infinity when playing with more guys on the court than their opponent.”