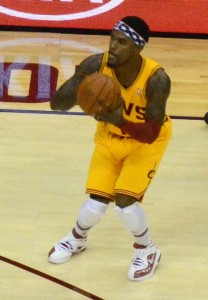 When Daniel “Booby” Gibson first came into the league, he had a chip on his shoulder. After playing two years at the University of Texas, Gibson thought he was ready to jump feet-first into the NBA. Despite his play at U of T, he wasn’t drafted until the second round by the Cleveland Cavaliers.

It didn’t take long for him to prove that he belonged in the league.

After playing sparingly as a rookie, he showed his worth in his sophomore year, starting 26 games and averaging 10 points and two assists.

Right as his star was about to really take off, an ankle injury sidelined him for most of the 2008-09 season. Issues with his ankle would slow him down over the next three seasons. Eventually, the grind of the NBA would take a toll on his body. Gibson hasn’t played a single minute in 2013-14.

Nowhere close to retirement, Daniel has been resting up his ankle, while fielding calls from teams who are looking for a dynamic backup point guard. He’s also spent his time helping younger players develop into the stars that they could be.

Hoping to give some young players a chance to be seen, he launched his own AAU team, B Gibs Hoops. He has high hopes for his squad this year. With several D-I level players suiting up for him, the team will be kicking off their inaugural tournament this year.

That’s not all Booby has in motion. He’s also planning his return to the league. Recently, I had the chance to speak with Gibson about his rehab, the high hopes he has for his AAU team, his relationship with LeBron James, and who he thinks can win it all this year.

BMF: What prompted you to want to start your own AAU team?

Daniel Gibson: I always said that if I got the opportunity and I was blessed enough, I would flip the script and put some money behind and create a team based off kids from around the way that don’t usually get that type of exposure. I wanted to put some money behind them and give them the chance to get seen by some college coaches.

BMF: Speak to me about some of the players. Who do you think has the potential to play Division 1 basketball and possibly the pros?

Gibson: My cousin, his name is Markus Vallien, he’s only in the 9th grade, but they got him on the varsity right now and he’s averaging about 15, 16 a game. I got another kid, Justin Jackson on my 16-under team who’s going to North Carolina. Even my nephew (Travon Shelven). I guess it’s in the bloodline. He’s in the 8th grade and he’s had the University of Texas come to see his games. It’s crazy because now we got suburban kids coming out to play for an inner-city team.

BMF: I know this might be down the road some, but do you see yourself ever doing something like what Deion Sanders did with Prime Time Prep, where you’ll be full-time working with kids not just in basketball, but maybe in football and other sports as well?

Gibson: No doubt. I have a few collaborations with a few guys that I know from other sports and we’re all collaborating on different ideas to make something like that happen. A lot of guys who get to the league come from humble beginnings want the opportunity to give back and make it as widespread as possible.

BMF: What’s the schedule looking like? What games do the guys have coming up?

BMF: How much does watching those kids play for your AAU team make you want to get back on the court?

Gibson: (laughs) Listen! I decided at the beginning of the year when I injured my foot again to take the year to get my mind right and see if this is still what I want to do. That’s what drives me. These kids look up to me like I’m their Michael Jordan. It inspires me to get back in the gym and get back out there.

Really, March Madness kind of put it over the top. I’ve been getting myself back in the right frame of mind to make a run at getting back in the league next season.

BMF: Do you think it will be a challenge getting back to the league?

Gibson: I definitely have to prove myself over again. These teams want to know why. Teams were contacting me at the deadline to see if I wanted to comeback for a 10-day contract. I was really hiding out. Nobody really knew what was going on with me. So I know I got to come back and prove myself. I know it will be difficult, but with the mind frame that I’m in, I know I can accomplish whatever it is I want to do.

BMF: What’s your relationship like with LeBron James right now?

Gibson: As far as my relationship with him, he’s always been supportive of me. He always believed in my abilities since I came to the team and we still speak to this day … I never faulted him for making a business decision. Playing in the NBA, you learn that everything is a business. We are all CEOs of our own companies. He made an executive decision. I know the city wanted him to stay because they felt like we were close to a championship, but he had to do what was best for him.

Gibson: When you’re around greatness, it makes you want to strive for your level of greatness whatever that is. It’s him just doing his thing. He didn’t have to be vocal and tell you to get in the gym. If he’s out there 30 minutes to an hour before practice, then you want to be there too. And he was so unselfish. Without him, I don’t get the dollars that I got. It was an honor to play alongside of him.

BMF: Who do you feel will win the championship this year?

Gibson: To me, it’s really up in the air right now. I’m sad that Patrick Beverly got injured for the Houston Rockets. I felt like he was a silent sleeper. I think everybody is overlooking that Brooklyn Nets team because of how they started off. They’re built for the playoffs. I wouldn’t be surprised to see them knock off Indiana or Miami on their way to a championship.

You can listen to Daniel’s interview in its entirety here.