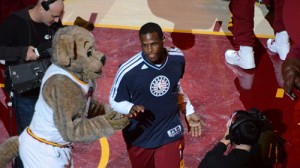 With their sophomore seasons nearly complete, the almost two-year debate asking, “Who’s better, Harrison Barnes or Dion Waiters?” has seemingly been put to rest. Waiters is emerging as an instant-offense player in the mold of Vinnie “The Microwave” Johnson, while Barnes’ production has failed to meet the hype.

Bounce back to June 2012 and most anyone associated with the NBA or college basketball had pegged Barnes as an ideal fit for the Cleveland Cavaliers, if he were to “fall” to them at pick No. 4. With the North Carolina product available and a need for a scoring wing, the Cavaliers shocked the basketball world by passing on Barnes and selecting Waiters. Three picks later the Golden State Warriors would select Barnes.

Choosing Waiters, who hadn’t even started a single game at Syracuse, over the heralded Tar Heel was widely criticized both nationally and in the Cleveland market.

That criticism has turned to praise as Waiters has averaged 15 points per game over his first two seasons, while Barnes has yet to crack double digits. Through almost two full seasons, Waiters’ PER is over three points higher than that of Barnes. Waiters’ field-goal percentage, assists per game, and turnovers all better the numbers of the Golden State forward.

In Cleveland, Waiters has been both a starter and sixth man who will finish 2014 as the team’s second-highest per-game scorer (behind Kyrie Irving) for a second consecutive season. His minutes have increased of late, as he’s filled in for an injured Irving, splitting time between point guard and shooting guard. Behind Waiters’ offense Cleveland has won five of seven games, six of which were without the services of the All-Star Irving. In four of those last seven contests, Waiters led the team in points as the Cavaliers continue to push for the Eastern Conference’s final playoff spot.

Meanwhile, over the Warriors’ last 10 games, Barnes has seen his field-goal percentage drop to under 30, while scoring fewer than five points per game. Barnes has been relegated to backing up Andre Iguodala and his spot in the playoff-bound Warriors’ rotation is no longer a given.

Selecting Dion Waiters is one decision Cleveland fans can look upon fondly.