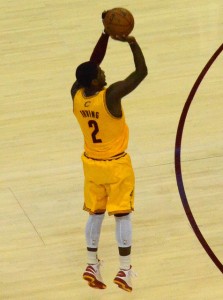 Some nights a team’s got “it,” some nights they don’t. Sometimes you’re the windshield, sometimes you’re the bug. However you put it, Wednesday night was one that the Orlando Magic will hope to soon forget. The team suffered its worst home loss since a 28-point drubbing at the hands of the Miami Heat in November.

This time around, it was the Cleveland Cavaliers who laid the law down in Orlando, taking home a defiant 119-98 victory. The win secured a four-game season series sweep for the Cavaliers, who are sitting just two games outside the final playoff spot in the Eastern Conference.

After trading buckets early, Cleveland began to find a groove, allowing them to extend their lead to as many as 13 in the opening frame. Cleveland, who got All-Star point guard Kyrie Irving back from a bicep injury, used their strong guard play, along with the ability of their bigs to not only play down low, but also knock down shots from outside, to their advantage early and often. This, coupled with some miscues from the Magic defensively, whether it be poor switches or losing track of a player, allowed the Cavaliers to score 18 points in the paint.

Unfortunately for Orlando, they were unable to tighten up defensively in the second quarter, yet again giving up 35 points to the scorching hot Cavaliers. As coach Jacque Vaughn said after the game on multiple occasions, you had to “give them (Cleveland) credit” for their ability to string the Magic out and knock down their shots consistently. The Cavaliers continued to torch the Magic with strong play from their bigs (getting a combined 32 points and 10 rebounds in the open half) and dribble penetration from their guards to score 20 more points in the paint, pushing their fast break total to 15 for the half.

“They had a little bit of both, you give those guys a lot of credit,” Vaughn said about the Cavs’ first half. “They were really intent coming into this game and Mike (Brown) really had those guys ready to play and they were the aggressors and that’s what it boils down to, two 35-point quarters, the first and the second quarter, and we dug ourselves a hole, but give those guys credit, they really played well. Spencer (Hawes) shot the ball well and so overall their penetration, give them credit.”

The second half wasn’t a whole lot different than the first for the Magic, who struggled more on both ends. Cleveland kept their plan of attack going, pushing their guards and scorching the Magic inside and out with solid shooting and smart plays. Orlando’s defense turned it up some, allowing only 49 points compared to 70 in the opening two frames.

With the blowout in full force, it allowed the Magic to get some extra run for some of the guys who normally wouldn’t see minutes, and it paid off. Sharpshooter Doron Lamb impressed coach Vaughn, thanks in large part to his 14 points on 3-of-5 shooting from downtown, and 5-of-5 from the free-throw line. Vaughn had this to say after the game about his second-year guard’s strong play: “I think overall he was (efficient), really first of all, sprinting the floor to get to his spots, so he was ready. His shot preparation was really good tonight. I think out penetration, our bigs rolling to the rim made them react a little but and he some some open shots. He’s done a good job of getting better every day in practice and good minutes for him tonight.”

Outside of Maurice Harkless, all of the Magic’s double-figure scorers were off the bench, paced by rookie Victor Oladipo’s 16. Lamb’s 14 was a close second, while Tobias Harris, who appeared visibly frustrated after the game, contributed 11 in the loss. E’Twaun Moore and Harkless rounded out the group, finishing with 10 apiece.

Cleveland was a much different story. Three starters, led by high-scoring guard Dion Waiters, scored 20 points or more. Waiters led all scorers with 26, while Hawes and fellow big man Tristian Thompson scored 20 each, with Thompson adding 11 rebounds to his stat line. Irving looked like he never missed a beat, scoring an efficient 17 points, while dishing out eight assists and grabbing six rebounds. Combo guard Jarrett Jack came off the bench to join the party, finishing with 13 points on the night.

Orlando’s defense, especially in the interior, was their biggest problem the whole game. They gave up 64 points, which didn’t sit well with one Magic player in particular. “Terrible, terrible. It’s self-explanatory, it’s not how we wanted to play and that shows us that there’s no effort,” said a disgruntled Tobias Harris.

Andrew Nicholson, like coach Vaughn, gave Cleveland credit for attacking Orlando’s defense: “We’ve got to give them credit. They got to the rim fairly well, they shot the ball well tonight, they played hard tonight.”

The Magic will look to rebound from the tough loss on the road in Charlotte when they face the division rival Charlotte Bobcats on Friday night. Cleveland on the other hand will travel to Atlanta to play the Hawks in a game that’s seemingly a must-win for their playoff hopes down the stretch.