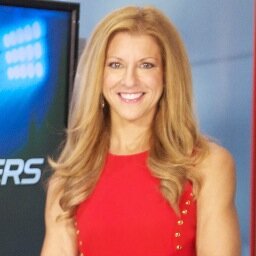 March Madness is hitting its crescendo, which means sports fans throughout the country are being inundated with college basketball coverage. One outlet in particular that has made a splash in college sports coverage this year is Campus Insiders, a network that is making its name on the frontier of the medium. Campus Insiders is an exclusively digital sports network that aims to bring the production of the cable giants to the masses, via the Internet.

The online endeavor is funded by Jerry Reinsdorf, owner of the Chicago Bulls and Chicago White Sox, and features broadcasting veteran Bonnie Bernstein. Bernstein, the site’s on air host, in addition to being the Vice President of Content and Brand Development, is busy covering the NCAA tournament, but took some time out of her schedule to talk with Baller Mind Frame about her background, sports journalism, and Campus Insiders

You were a gymnast when you were younger—is that where your interest in sports came from, playing them?

I think my interest in sports came from my parents because they’re diehard sports fans themselves. When I was growing up, it was back in the day when remote controls didn’t really exist and you didn’t have much say over what was on TV, and it just so happens that sports were always infiltrating the televisions in our home. So it was sort of a passion through osmosis, I suppose.

I’m interested in what sparked your decision to go from playing sports to covering them. I know you studied broadcast journalism at Maryland. Was that your plan going into college, to transition from participating in sports to the reporting side of the industry?

I decided when I was 12 or 13 years old. I was at a Mets game with my family and I was just kind of exploring and stumbled across the press box. The security guard brought me to the press box and he let me watch the Mets take (batting practice) and I thought it was the coolest thing ever. It was kind of that “aha” moment, albeit at a very young age, that I knew I wanted to write sports for a living. I really never had any designs on broadcasting. I wanted to write for Sports Illustrated … so pretty much everything I did moving forward was geared toward launching a career in sports journalism.

The gravitation to broadcast came in college; I was just surveying the journalism school at the University of Maryland and the broadcast teacher got great reviews, so I took those classes and never really looked back.

My participation in sports is very much a foundation. I remember thinking when I was younger how cool it would be to meld two of my passions—sports and writing—into an actual career and I’ve always felt really fortunate that I’ve been able to do that.

Reporting has changed so much over the last decade with the accessibility of the internet and tools of digital media. When people look at that shift, they often look at print media and newspapers, which are dying off, but I’m curious how that digital revolution has impacted broadcast journalism and what kinds of changes it’s forced you to make over the last decade or two.

Gosh, in so many different ways. I think the whole digital aspect of journalism forces people in our field to understand technology because you’re doing yourself a disservice if you don’t. Everything from being able to edit on a laptop to there being an app that is a makeshift teleprompter when you’re out in the field. I never use a teleprompter in the field, and I haven’t used this app yet, but I know lots of folks that do.

Really just being able to understand and leverage that knowledge of technology to benefit what you’re doing journalistically—I also think that it’s provided so many different outlets. When I was coming out school there weren’t a lot of options when you were looking for jobs. Ours is an industry that, no matter if it was 20 years ago when I was coming out of it or when kids are coming out of college now, the demand is always going to outweigh the supply, but the supply is much more abundant now because it’s not just not the networks and the television stations and the radio affiliates. There are all of these different cable entities, and if you can’t find a job you can create your own YouTube channel that will enable you to create your own content, or your own blog and there are all of these digital platforms.

How did your involvement with Campus Insiders come about?

They came to me and they were interested in me being the face of the network. Now, our Executive Vice President, Crowley Sullivan, comes from ESPN, so there’s a familiarity there. Our COO and our Head of Programming come from Intersport. When I was in between CBS, heading back to ESPN, there was a little bit of a down period. During that time I hosted a March Madness studio show for Intersport, so we had all worked together in some capacity.

While it was a really flattering offer, I’m at the point of my life—I’ve just never been comfortable standing still and I genuinely feel that if I don’t grow every day, whether it’s personally or professionally … it’s not a full day for me.

Over the last couple years, I’ve been looking for something more entrepreneurial. I’ve always wanted to be part of a team that’s built something from the ground up. That’s kind of hard to do at an ESPN or a CBS because, obviously, they’re well-established networks. You can create a series or you can create a component or arm of the network.

Basically what I said to the folks over at Campus Insiders was if we can create some sort of hybrid opportunity where I’m hosting part of the time and out reporting and covering big events, but then during the other period of the year, I’m actually part of the team helping build the network—that’s something that’s very enticing, and they were thrilled that I inquired about that.

The first one is that we’re completely unauthenticated, which basically means we’re free. If you want to access premium content for some of the other networks’ digital platforms, you have to have a cable subscription or you have to pay a subscription fee otherwise there’s a paywall in front of you.

All of our content is completely unauthenticated. You don’t owe us any money; you don’t have to have any cable affiliation, which is very valuable in this day in age where you got so many people that are cord-cutters and moving away from having that monthly cable subscription.

The second one is, from a programming standpoint, our biggest differentiator is our insiders. We have more than 80 correspondents that are embedded on campuses across the country, who are play-by-play guys for football or basketball, or both, or analysts or folks covering the beat. … They’ve all been in their markets for a number of years and deal with the players and coaches on a daily basis, so they have the access.

It really enables us to have a feeling of immediacy about our content because whenever there’s something going on, we pop them up on Skype and get a report. They’re there, they’re our boots on the ground, our eyes and ears. The other networks, if there’s a story breaking, they put somebody on a plane and send them out.

While producing online-only programming has become pretty normal for websites like Netflix and Amazon, it seems newer in the sports world. The cable subscriptions for sports channels seem to be what’s holding together the cable model, with their big TV deals. Do you see the Campus Insiders model as the future of sports broadcasting?

We do. I think with each passing generation there is going to be more and more consumers who only get their content through digital means.

Netflix is a perfect example. House of Cards was in double-digits in Emmy nominations and you can only get that content online. And now you see these partnerships that are forming with Netflix, Comcast, and Apple. These cable companies understand that customers don’t want to pay the amount of money they’re paying on a monthly basis if they can just download their content, hook their computer up to a TV with an HDMI cable and stream their content on their television.

It’s become very pricey, and unnecessarily so. The cable companies are losing money hand over fist and they’re trying to figure out a better model, and it’s by getting in with these online companies, these over-the-top content providers.

I think the folks at Campus Insiders had the vision to see that this was the route that content distribution and creation was going, and we’re ahead of the curb, and for that we’re fortunate. We just launched an app on Apple TV and there are fewer than 10 sports apps. We’re only one of two. The other one is WatchESPN, but again, you can only access their content with a cable subscription.

Your Lady Terrapins are playing against Notre Dame in the Final Four this weekend, do you have a prediction?

Oh really? [laughs] I predict we’ll win. What other prediction could there possibly be?