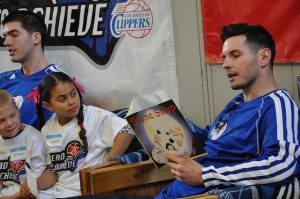 The Los Angeles Clippers have a firm grasp on third place in the Western Conference, and are bolstering their lineup for the stretch run. J.J. Redick, who has been out since Feb. 3 with a back injury, will return to action Thursday night against the Dallas Mavericks, according to a report from Eric Patten of Clippers.com…

Unfortunately for the Clippers, the day Redick returns to action also sees the losses of Jamal Crawford and Danny Granger, both valuable three-point shooters. Crawford is resting an injured left Achilles tendon, while Granger is nursing a hamstring injury. Both players might not see the court again until the playoffs. SB Nation

The NBA is becoming more and more like the NFL where injury luck is the most important factor in who is capable of contending for a title. Teams with a cushion for their preferred playoff seed are resting key players to ensure they are capable of producing when the postseason starts. The Clippers have a three and a half game cushion for the no.3 seed in the West. Taking Crawford and Granger off the court now will affect momentum, but resting up is the path that yields better results more often than not.