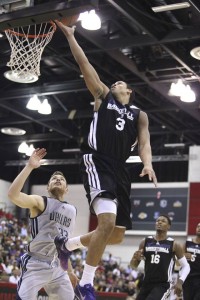 There comes a period in every NBA rookie’s young career that presents the player with the opportunity of extensive playing time, a gift which allows him to exhibit his future potential as a basketball player. Some rookies, whose early careers are filled with immense expectation, receive this playing time from the moment they lace up for their first NBA game and make the transition into professional ball.

For the Sacramento Kings, this player was Ben McLemore. He was picked seventh in the 2013 NBA draft, a place among the draft board which usually includes a starting role to the respective player.

Conversely, there are the bottom dwelling draftees who are expected to impress prospective teams and to find their own way in the league. As such, a player picked out of the University of Detroit Mercy late in the second round is understandably regarded as one without much upside who will likely ride the bench on the team that drafted him and hope to find a place in the NBA to call home. It is a harsh reality many young players must face.

This was Ray McCallum’s reality less than a month ago.

For a player as unknown and underappreciated as Ray McCallum, finding playing time in a league filled with the best basketball players in the world seemed to be a complete impossibility just a couple weeks ago. He was consistently put into the game to play garbage time when the Kings were either winning or losing by big numbers, and he hovered around just a minute per contest. It doesn’t matter if a player is as good as a Kevin Durant or Carmelo Anthony; if he only gets one minute per game, he’s going to look like a scrub among the elite.

For McCallum to step into the opportunity he has currently seen as a member of the Kings, Jimmer Fredette had to be gone. It was a paramount achievement in McCallum’s professional well-being when the team parted ways with Fredette, as it assigned him the role of backing up Sacramento’s beloved Isaiah Thomas. Once McCallum stepped into this second-option role, it didn’t take much time for him to become a temporary starter, with a quad injury to Thomas granting McCallum over 40 minutes per game and a chance to prove his skill as a guard.

Through this transition between starting players, it has become evident that Thomas and McCallum have very different styles as point guards. Thomas is one of the most effective score-first point guards in the league. He scores the basketball in so many different ways that it’s hard for defenses to guard him effectively. His floater is one of the most valuable assets he has, making it easy for him to evade opposing big men and score over the top of them.

McCallum is equally as capable when driving to the basket and has a distinct size advantage on Thomas, which allows him to directly attack rim protectors rather than be forced to pull up for contested floaters. This is a noticeable scoring advantage that McCallum has over Thomas, and it shows every time he’s on the floor as he charges opposing players and finishes through contact. Thomas scores the ball more often, but McCallum does so in a more directly aggressive way as he drives through defenders instead of around them to draw contact and get himself to the charity stripe.

As a point guard, the ability to handle the basketball and keep a dribble alive long enough to create a strong offensive possession is of cardinal importance, and it is an area of his game which McCallum has to improve to become the best point guard he can be. He doesn’t consistently keep his dribble alive like Thomas does, causing the offense to reset and killing essential seconds off the shot clock. If he can learn to keep his dribble alive long enough until he wills himself to stop and make a play, McCallum will become leaps and bounds more formidable as a play-maker. He is a rhythmic passer and has impressive floor vision, traits which would become that much more deadly if he learned to keep the ball alive.

With all these comparisons between the two Sacramento Kings point guards, it is still obvious that Isaiah Thomas is the better player. He’s more experienced, he’s a better scorer and his innate ability to give his team a fighting chance in close games is of high importance to this ball club. But within his time on the injury reserve, Ray McCallum has proven to his team and to the NBA that he is a legitimate, professional talent.

Through his few games a starter, he’s had to deal with bad shooting stretches and a lack of production from his supporting cast, but he’s still exemplified his worth as a player. He is an effective scorer when given the chance to drive and draw contact, and he finds his teammates in stride while attacking the rim to give shooters the best possible looks at the basket. This is what he should build his career on: Becoming a dual-threat point guard who attacks constantly and gets his players into rhythm.

Regardless of what path he chooses to take as a player, Ray McCallum has made this explicitly clear to his team and to the league: He is not to be ignored just because of his draft position or his early-career statistics, as he has shown the fight to prove speculators wrong. This guy is good, and an increasingly developed game will take him far in the NBA.